Gaia, the Earth goddess, is often invoked to personify the way the biosphere and other Earth systems interact. But although the usual implication is that life helps maintain an environment suitable for its continued existence, it isn’t always clear exactly what the name signifies. Scientifically, the Gaia hypothesis – or Gaia theory as some would have it – is at the same time controversial and frustratingly fuzzy. There are plenty of disagreements about its status, but it can be hard to pin down exactly what the disagreements are about.

Two new books help make things clearer. Examining the status of Gaia from quite different points of view, philosopher of science Michal Ruse and Earth system scientist Toby Tyrrell both offer provocative reappraisals of the ideas about linking of living systems and geochemistry first outlined by James Lovelock. Together, they suggest that today, nearly fifty years after Lovelock started thinking hard about the differences in atmospheric composition between planets with life and those without, it’s possible to come to some clearer conclusions about his perspective on the biosphere. 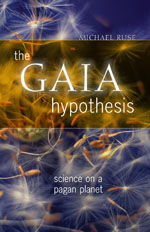 The Gaia Hypothesis: Science on a Pagan Planet, by Michael Ruse.

Ruse goes on a lengthy trail through the history of ideas to trace the origin of the notion that Earth as a whole is in some sense “alive”. The road goes right back to Plato, and twists and turns through a good deal of later natural philosophy. The heart of his analysis, though, begins with the simple criticism of Gaia originally voiced by the evolutionary theorist Stephen Jay Gould: “Gaia is a metaphor, not a mechanism”.

That is not itself a bad thing. Metaphors often ground scientific theory. They can suggest mechanisms, and the suggestions can be tested. But they also carry baggage, as another oft-used metaphor tells us, and in this case it is baggage that makes many scientists uneasy.

Scientists are wary of seeing the planet as somehow alive

As Ruse says, Gaia theory sees the world as an organism. That has made it a hit with many non-scientists. The idea of Earth as somehow alive and self-regulating, and the linked metaphors of planetary physiology or even planetary medicine, have a broad appeal.

But they make scientists, including the Earth system scientists whose field’s growth owes a fair bit to the advent of Gaian ideas, wary. They imply – as Lovelock often does himself – that we are dealing with an entity with agency, with a purpose. In a word they commit the scientific and philosophical offence of teleology, explaining something by invoking the goals it is trying to realise. That accounts for a good deal of scientific opposition to the grand Gaian scheme.

There’s another scientific attitude to Gaia, though. It involves specifying more closely what the Gaia hypothesis actually is, and looking at whether there is any data to back it up. This approach  does not necessarily produce agreement, but does make it easier to understand what the arguments are about.

Positive feedbacks can leed to instability and extinctions 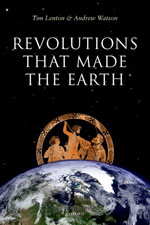 Revolutions that made the Earth, by Tim Lenton and Andrew Watson.

Tim Lenton and Andrew Watson, both sometime co-workers of Lovelock, do some of this work in their excellent Revolutions that Made the Earth, published a couple of years ago but just out in paperback. They conclude that as life emerges on a planet, a “microbial Gaia” is reasonably likely to appear. This involves recycling loops that enhance overall productivity of the biosphere, and “some potential for rudimentary higher-level selection to generate a trend towards improved environmental regulation over time.”

They also reckon the appearance of what they dub “complex Gaia”, with land animals and perhaps eventually self-reflecting observers (like us), is a good deal less likely. The fossil record shows that complex Gaia can be wrecked by positive feedbacks, leading to instability and catastrophic extinctions.

That is not a distinction Toby Tyrrell makes in his review of the evidence. But he also concludes that what we can call the stronger versions of Gaia call for evidence of long-maintained stabilities in Earth systems that mostly can’t be found.

The most important Gaian claims, he says, are that Earth is a favourable habitat, has remained so because the environment has been stable over geological time scales, and that this is partly due to life’s own overall influence on that environment.

The first of these, that the environment is well-suited to the organisms that live in it, he thinks is more or less a tautology. If it wasn’t, they (and we) wouldn’t be there. Another key claim, that the Earth’s atmosphere has a composition a long way from chemical equilibrium because of the continuing action of living things, is perhaps the original core of Gaian thinking, and is pretty well accepted. However, he is a strong critic of the idea that the Earth has been a stable environment for life over long stretches of time, in spite of external influences trying to shift its state. The best current data, he reckons, indicate that it is not true.

As an Earth system scientist he agrees that the previously dominant idea – that the Earth's environment is mainly shaped by geology, with little or no role for life – is now outdated. But while he accepts that ecosystems and environment co-evolve, he does not think life exerts any effective control over the Earth system. Planetary homeostatis may be an appealing poetic fancy, but as a scientific proposition it does not measure up.

There is no magic remedy to anthropogenic climate change 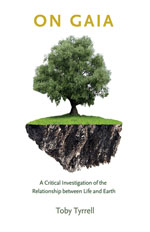 On Gaia: A Critical Investigation of the Relationship Between Life and Earth, by Toby Tyrrell.

Does this matter? Tyrrell thinks it does. He wants to stop his fellow Earth system scientists invoking Gaia, as he suggests they did in the well-known Amsterdam declaration of 2001.

This is widely taken by enthusiasts for Gaia as support for their ideas. Tyrrell thinks this is a bad thing because it encourages people to think that the feedbacks built into the Earth system will keep it stable. That, in turn, makes some people think that our efforts to alter the composition of the atmosphere by burning fossil fuels will evoke feedbacks that somehow put things right again, averting dangerous climate change.

That particular worry seems a bit overblown. After all, the Amsterdam declaration went on to say that “The interactions and feedbacks between the component parts [of the Earth system] are complex and exhibit multi-scale temporal and spatial variability”. And the later State of the Planet declaration published by almost the same consortium eleven years on makes no mention of “self regulation”.

On the other extreme, Lovelock himself has attracted headlines for apocalyptic predictions which amount to saying that Gaia will soon be overwhelmed, at least as far as maintaining an environment comfortable for human civilisation goes.

All of which suggests that what matters now, scientifically, is not whether particular propositions within Earth system regulation acknowledge their origins in Gaia theory. However they are regulated, we need to assess exactly how soon, and by how much, human activity will overwhelm the capacity of Earth systems to cope.

On Gaia: A Critical Investigation of the Relationship Between Life and Earth, by Toby Tyrrell. Princeton University Press, 2013.

Revolutions that made the Earth, by Tim Lenton and Andrew Watson. Oxford University Press, 2011.

The Evolution of Earth System Science

In praise of models