In the 1950s, outbreaks of a previously unidentified haemorrhagic fever erupted around the Argentinian city of Junín. Victims first experienced fever and fatigue. This rapidly progressed to severe internal bleeding and multiple organ failure, with 10-30% of these cases proving fatal. Shocking as the outbreaks were when they first appeared, they became a regular occurrence: up to 1,500 rural workers contracted the Junín Virus each year until the 1990s, when an effective vaccine was developed.

Junín is an agricultural city, located west of Buenos Aires in some of Argentina's richest farmland, and the virus outbreak occurred shortly after the region's pampas were converted to intensive corn, wheat and soy plantations. This sequence of events is not isolated. Newly cultivated lands are strongly associated with haemorrhagic fevers in Venezuela, Bolivia, and Brazil.

Disease-farmland links have for many decades had an air of the incidental. But recent research suggests that they may be more than just bad luck – and that cultivated land, no matter the crop, shares features that may increase the likelihood of disease outbreaks.

Some links between cultivation and disease are well established. The film Contagion and the deadly real-life Nipah virus that inspired it show how human encroachment into wilderness areas can bring us into contact with diseases we've never met before 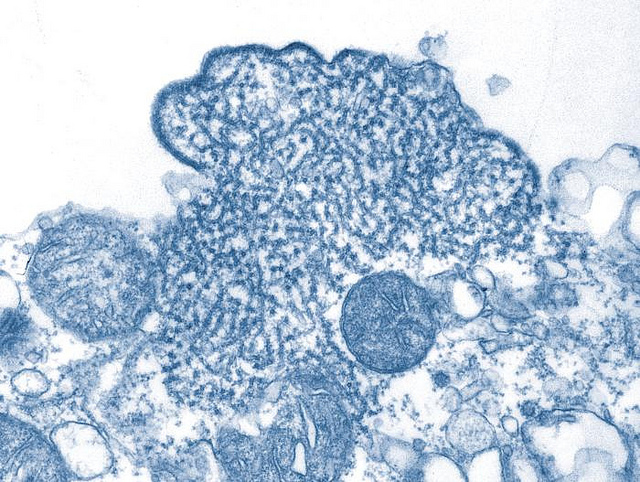 The Nipah virus broke out in Malaysia in the late 1990s, taking more than a hundred lives. Photo: Cynthia Goldsmith, CDC

In the case of Nipah, this was the result of agricultural expansion in late 1990s Malaysia, which displaced infected fruit bats, sending them in search of what epidemiologist Anthony McMichael calls "a new fast food environment." The bats were drawn to mango plantations, only to end up transmitting disease to pig farms located nearby. The resulting encephalitic virus outbreak took over a hundred lives and shut down a swath of the Malaysian peninsula.

Still, you could argue that the real problem with the Nipah virus appeared to lie with the jungle, not with the newly cultivated land: The role of agriculture was simply to push human activity out into new areas. There, people and their pigs ended up in contact with infected fruit bats whom they would not otherwise have met.

That is not the case in South America's grain belt, which has been given over to corn and soy beans for decades. There's little wilderness to speak of – just the intensively cultivated, homogeneous rows of crops you'd expect from a bread basket. Junín disease is carried by the corn mouse – a hardy, adaptable, fast-spreading species that took an immediate liking to the fields of corn, soy beans and insects. Other animals – those that had preferred the more varied fare on offer in the old pampas –  died off.

This appears to be the case more generally, according to disease ecologist James Mills, chair of the Biodiversity and Emerging Disease Working Group in EcoHealth – a project under the aegis of global environmental change programme DIVERSITAS that specifically looks at the consequences biodiversity loss has for global disease ecology. A fall in biodiversity, which tends to happen when a forest or other natural environment is replaced by a monoculture, seems to foster animal-to-human disease crossover, or zoonosis. But, he says, "anything that sustains or restores diversity (plant or animal) will contribute to mitigating the frequency and severity of outbreaks of some existing diseases.”

It's not immediately clear why this should happen. The corn mouse had been in the region before without such grave consequences. So why should a smaller pool of animals – and, therefore, of potential virus hosts – give rise to more pathogens?

Mills says the key to answering this is to examine what happens after a decrease in biodiversity. For Junín, this hinges on the corn mouse's ecological role. The mouse is a member of a class of animals often referred to as "generalists" or "opportunists." Generalists have little trouble adapting to new food sources or spreading into new environments, including those altered by humans. Because they're suited for colonizing new environments, they also have a tendency for explosive population growth. The resulting high-density populations are "ideal for efficient transmission" of pathogens, says Mills. This is all the more concerning since generalist species' ability to occupy many different habitats brings them into contact with many different pathogens – so they are more likely than other types of animal to harbour diseases.

Generalists contrast with “specialists”, which live only on particular foods and in particular habitats. Turning pampas into cropland tends to favour the generalists. "When the habitat is turned into a monoculture, the specialists will be the first to disappear," Mills says. "Eventually, the small mammal community may consist of one or a few species of generalists who do quite well in disturbed habitats, and their populations thrive, especially in the absence of their specialist competitors and predators." On the pampas, the Patagonian mara – a large, “specialist” rodent that avoids disturbed habitats in favour of scrubland (and does not carry the Junín virus) –  is now listed as near-threatened.

Communities with high biodiversity, in contrast, exhibit something called the "dilution effect", where disease-carrying generalists are mixed up with a lot of other, non-disease-carrying specialists. Corn mice in Argentina almost certainly carried Junín virus before the 1950s. But because there were so many different species jockeying for position in the ecosystem, an infected mouse wasn't particularly likely to encounter another member of the same species that could serve as a potential host. In the ecological community that used to occupy the pampas, disease levels naturally stayed low.

However, once these other, buffering species disappeared and mouse numbers exploded, the disease quickly reached epidemic levels. When the harvest came, the rodents' infected urine was dispersed by threshers or other heavy equipment, transmitting the virus to human workers. As Mills points out, this is a scenario that doesn't require nearby wilderness to serve as a disease reservoir. It "can easily be perpetuated in agricultural areas that have been under cultivation for decades."

This link between disease outbreaks and the loss of the dilution effect has been demonstrated with other diseases as well. In a striking 2009 study¹, researchers from the University of New Mexico were able to increase the prevalence of hantavirus – which can cause fatal respiratory disease in humans – in Panamanian rodent communities simply by trapping and removing specialist species that did not act as hantavirus hosts.

Research into the relationship between biodiversity and disease is still relatively new. The hantavirus study, while compelling, is one of a very few that experimentally confirm the dilution effect. McMichael, the epidemiologist, cautions that there is still "ongoing debate about whether, and in what circumstances" loss of biodiversity affects disease. That implies it will be hard to pinpoint specific agricultural practices that might minimize disease emergence.

Ebola and other emerging diseases: losing the trees before we see the forest’s connection to our health