What is the World Bank today? There’s been a lot of change – a new president, a new strategy launched earlier last year.

Rachel – The World Bank today aspires to be a development institution that lends finance and that provides the best global knowledge and technical assistance to its clients. These clients are developing countries, but increasingly it is also the private sector in the developing world. What matters is not just the money that we lend, it is the knowledge that we bring with the lending. We sit at the intersection between finance, development knowledge, private and public sector in a very unique way.

The new World Bank strategy features a much more activist stance on climate change. You have a lead role in this regard, having just taken up a new role as the World Bank’s Special Envoy on Climate Change. How did this change in strategy happen, and why? 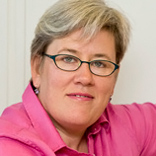 Rachel Kyte is World Bank VP and Special Envoy for Climate Change. The Guardian has called her a "straight-talking, no-nonsense campaigner with a warrior-like spirit." Kyte has gained a reputation as an uncompromising champion of the fight against climate change, and as an engaging public speaker. She is on Twitter @rkyte365.

Rachel – When the new president took office, we looked again at our mission and asked ourselves – were we ambitious enough? Jim Kim asked us to raise our sights. Our ambition is to end extreme poverty and build more shared prosperity, a more inclusive economy. This became front and central again with everything that we aim to do.

But when you look at the challenge of ending extreme poverty and building inclusive growth, you come up against the need for sustainability. And you come up against the fact that the impact of climate change today – not in the future, but today – is already beginning to threaten the advances that have been made in development over the last twenty to thirty years. If you are committed to ending poverty and you are committed to building prosperity, you have to grapple with climate change.

It became clear to us that we had to help our clients think through what climate change means for their own economic prospects, but also that we had to say that if you care about development, you have to care about climate change. European countries are giving 0.7 percent of their GDP to development. That is great, but if you're doing that at the same time as letting climate change go ahead in an unmitigated way, you are cancelling one out with the other. That is why climate becomes so important.

The World Bank commissioned a big report on climate change, "Turn Down the Heat", and a follow-up was published last year. This was the first time that the World Bank has commissioned such a report that is based on a comprehensive synthesis of available science. Could you tell us how the idea for this report emerged and about the process of working with the scientific community to develop it?

Rachel – We're an institution that is based on many disciplines, with economics being at the fore. Increasingly, in our dialogue with the private sector, but especially with governments in developing countries, we were unable to answer the question of – okay, we understand that we need to be more resilient, we need to adapt, but we don't know what we need to adapt to. So we started talking to the Potsdam Institute, and the decision to work with scientists was to inform ourselves of what exactly is the state of research. The scientific community has been moving so fast, and the evidence and data are coming so quickly. We really wanted to understand what this meant for our clients.

‘Turn down the heat’ began as a commissioned piece of work to help our own internal understanding, but when we started seeing the drafts of the report we were like – oh my goodness, this pertains to the entire future of development! We have to get this out there! And working with the scientific community is also really good for us because what we are trying to do is try and bring economics and science together in order to support a different set of choices for each of our clients.

If you're a minister of finance, and you imagine you need to grow your economy by seven, eight, nine percentage points of GDP a year, and the impacts of climate change through droughts, extreme weather events, etc. might take two to three percentage points away, then you need to understand that. Right now, I don't think that science is necessarily getting in front of the right policymakers in the right way. And if we can help them that's good.

You have a reputation for being able to rally different stakeholder groups, you are respected among businesses as well as NGOs. Future Earth has that same ambition, to be a global platform for engagement of diverse stakeholder groups. What advice can you offer from your experience?

Rachel – Help them listen to each other and talk to each other. I think for young research scientists coming up, you have to be excellent in your research, but you also need to understand that that research needs to be applied. It needs to be applied by economic policymakers and it needs to be applied by business leaders. The translation mechanism between science and policy is terribly important. And if you can't do that translation yourself, then partner with somebody who can. Through effective partnerships, and just by being able to listen, to understand that we can't talk past each other, I see amazing things happening.

Action on climate change is urgent. What can the scientific community do to help policy makers respond quickly to the challenges at hand?

Rachel – Some things are moving slowly, but some things are moving at lightning speed. And normally, when things move at lightning speed, it is because there is another additional ingredient present, and that ingredient is political will. To help make that political will a reality, science should remember that in most societies, it is still respected and revered. It should take that role very seriously and continue to communicate the importance of science. And then find ways to communicate science to policy makers, but also to the general public.

The way in which science and research speak to each other is not necessarily the way in which you need to speak to a lay audience. Developing both these disciplines, of speaking to one another and to a lay audience, one does not debase the other, one does not demean the other. Being able to package your research and science in a way that a group of fifteen year-olds understand does not mean that you are debasing your own scientific integrity or quality. It just means that you understand that they need to understand, and I think that is an honourable role for a scientist.