The next big thing for global transformation

You are known as the inventor of the Sustainable Development Goals. What made you propose them?

Paula – Ever since 1992 the world’s attention has been galvanised around the idea that as a society and economy we live on a finite planet. However, in 2010, as preparations for Rio+20 were underway, there were concerns that this major summit would be a missed opportunity. There was much talk of the green economy but there was nothing in place to get action on the ground. So we asked ourselves what has worked; of all the thousands of declarations and resolutions, the Millennium Development Goals are the one thing that people remember of the UN. The MDGs may not have been perfect but they galvanised action – they created partnerships like the GAVI Alliance. They’re a concrete tangible tool, not just rhetoric. We wanted to build on that with the SDGs.

The key to the SDGs is that they were built collectively. The fact that they were supported by Peru, Guatemala and the United Arab Emirates gave them the sense of a collective undertaking. Politically, it was important that we showed we meant it – there was no hidden agenda. The only thing we wanted to do was to give the international community a tool that was effective in delivering action on the ground.

How are they different from the Millenium Development Goals? 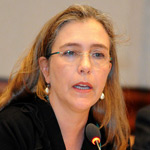 Paula Caballero Gomez is Director of Economic, Social and Environmental Affairs at the Ministry of Foreign Affairs of Colombia. She leads a multidisciplinary team that covers major multilateral negotiations and agreements in sustainable development. She is the main proponent of the Sustainable Development Goals proposed by the Colombian government as a post-2015 framework. Before working for the Colombian government, Paula has worked for many years at the UN Development Programme, where she managed diverse projects on biodiversity, land degradation and territorial approaches to climate change, as well as a wide range of posts within academia and the nongovernment sector.

Paula – The strategy, scope and approaches are different, but both have poverty eradication as the cornerstone. SDGs build upon the MDGs, and should incorporate the MDG targets. But SDGs seek to incentivize structural change, that is one of the most important differences. SDGs are about understanding trade-offs, linkages, synergies and opportunities across sectors. They are about changing how we traditionally approach development. And under such an approach, development can truly be understood across a spectrum, which means that the SDGs are universal, relevant for all. That is the second major difference.

Do you think that the development and environmental communities are ready to work together in an integrated way? There is a concern that universal integrated goals will reduce the focus on poverty eradication.

Paula – That was one of the biggest hurdles. There was a concern that the SDGs would deviate from the poverty agenda and detract from the MDGs. But that’s totally absurd. The specific MDG targets have to be integrated and taken further in whatever new framework we come up with. MDG1 is specifically about poverty, but – in some way – all the MDGs are to do with poverty. But poverty is far more complex than just income numbers; poverty has to do with multiple deprivations. There is a continuum between poverty and prosperity, and we need to understand what it means to pull people out of poverty irreversibly. Over two billion people live on less than $2 a day. At the other end of the spectrum one per cent of humanity are consuming 30 per cent of resources or some equally absurd number. That doesn't work – one planet is not enough for everybody to live like a middle– or high–class person in an OECD country under current standards. The food riots, the Arab Spring and Occupy Wall Street were not started by the poorest of the poor – they were started by people who have middle–class expectations and don’t want to lose what they already have. This is no longer just a developing country issue. Look at the unemployment rates in Spain, or the growing inequality in the US. Entrenched poverty is a universal agenda and it's linked to sustainable consumption and production. If we are really serious, we need a universal agenda rather than stop-gap paternalistic approaches to dealing with poverty. We need scientists to tell us what the thresholds of sustainable production and consumption are.

The MDGs alone cannot pull people out of poverty. The MDGs are about ‘end of the pipe’ solutions such as hunger, whereas the SDG would be about food security systems – that means putting in place the necessary structures, processes and investments; that means thinking about the role of commodity price volatility, stock markets, and farmers’ access to credit. You have to work out how to deliver energy and water to isolated communities and support sustainable livelihoods. The SDGs can thus provide a structured approach and would go a long way towards bridging the gap between the environment and development communities. Since Rio+20 for example, many countries have appointed somebody in the post–2015 brief who works across different ministries and there is active engagement at national level between the environment and development communities. The changes are happening.

An important thing to remember is that metrics are voluntary. Take GDP for example. There’s no treaty on GDP, but everybody measures it because it’s useful. The SDGs will do the same thing – it’s a metric. But we have to work hard to get the SDG framework right. The SDGs will not work if they’re unclear, or too expensive, or unsubstantiated. If we get them right, they could be a tool for launching a truly major transformation – globally.

There was a feeling that science was underrepresented in the MDGs. Do you think science now has a bigger role in the debate?

Paula – As scientists you have a really good vision of where environmental constraints are going to impinge on development trajectories. As policy makers, we have to think about climate change scenarios or we’re going to make decisions that seem like a good idea now but would result in devastating lock–in tomorrow. My appeal to scientists is to translate your brilliance and your findings for policymakers. We're not doing a very good job of that right now and the SDGs can help. The Colombian delegation has always called for scientists, experts and statisticians to support negotiations. The targets need to create practical action, so we want people in the field to tell us what they think is needed. Science can be the most amazing driver of change, but we also have to help scientists figure out how to get the message across.

We need more science. If we focus on targets, then scientists can provide inputs on what targets are necessary and what the future constraints are. 13 years ago the world looked so different. We’ve no idea where we're going to be in 15 years, but scientists can tell us about future scenarios and what the impacts of different policy decisions will be. We have to make sure there's room for science.

How will the progress of meeting the SDG targets be tracked?

Paula – We can decide on indicators, but it's fundamental that we work with statisticians. To start with, measuring things costs money. One of the problems with the MDGs was that statisticians weren’t involved; in most countries it was really expensive and difficult to put in place the systems to measure the MDGs. We need to create statistical capacity to help governments guide their decisions and their investments; SDGs are a tool for governments to do their job better. Tracking has to be relevant and universal, but countries can decide what makes sense for them. Some indicators will be applied differently in different countries. For example, if there’s a target or indicator on food waste under the goal of food security, there would be indicators that look at the different steps of the process from harvest to consumption. Some countries may focus on issues at the harvest level, some on production, and others on consumption. Countries will be able to focus on what is relevant for them. Understanding that conditions and circumstances change, we need a dynamic system.

Some have expressed concern that this could lead to a race to the bottom. I do not think so. There will be enormous international pressure for countries to sign up, and it will be very difficult for countries that evidently need to address certain issues to say 'this doesn't apply to me'. I think there's going to be a pressure for a race to the top. Countries should be able to add their own targets and indicators to those agreed by the international community, but a core set of goals, targets and indicators are required so that we can measure from a common referent. So that we have the collective clout to say 'we're going to achieve this'.

You mentioned government. Do you think the SDGs also speak to other stakeholder groups such as business?

Paula – Absolutely. Governments alone cannot create the transformation we need. We need to catalyse functional public-private partnerships, A good example is the Gates Foundation’s GAVI initiative, which brings together philanthropy, the private sector and governments, and has delivered vaccinations to millions. We need the collective muscle of the private sector, NGOs, academics, and scientists.

Bono, the Irish pop star, recently said at the World Economic Forum that SDGs sounds like the name of a heavy metal band. How can the SDGs do better at inspiring people?

Paula – I hate getting caught up in definitions and words. Sustainable Development Goals is just what it's called now. So long as the concept is galvanising action, that is what matters. There's a growing sense in the Open Working Group and elsewhere that this is the next big thing. The name is unimportant – it's what we've set out to achieve, and we need action. I hope that Bono becomes an ambassador for the SDGs!

New Research: a Way to Translate the Sustainable Development Goals Into Local Action

How much science is in the Sustainable Development Goals zero-draft?