The world's deltas are sinking. Why is this happening?

James – There’s no one overwhelming cause, but several major causes that combine. First, deltas were created by the flow of sediment from upstream, but now damming means there’s not enough new sediment added to make up for the natural compaction of the ground. Second, we’re extracting liquids from underground – mostly water, but oil and gas too. Then there is the way people use land on the seaboard, which can reduce defences against the sea.

Our four-part feature on the causes of delta erosion and the challenges this poses for livelihoods in the world's unique delta ecosystems.

The quiet sinking of the world's deltas — More than 500 million people live in the world's river deltas, yet new research shows that these population magnets are under increased pressure from human activity.

“Deltas are like snowflakes – each one is different” — Custom solutions are needed to protect each delta, says James Syvitski, Professor of Geology at the University of Boulder, Colorado.

Reporter's diary: a journey to Vietnam's southernmost tip — Our reporter, Hong Van, gives a personal account of how she covered the 300 km involved in going from Ho Chi Minh City to Cà Mau, the southernmost tip of Vietnam, and back in 31 hours.

Deltas at risk — A new infographic produced by IGBP highlights the challenges to the world’s river deltas.

At the same time, global warming has been causing sea levels to rise. How much is this affecting deltas?

James – The sea level has been rising at 3 mm a year, globally – a little more in some places, a little less in other areas. Some deltas have been sinking at 100 mm per year – and for years. The Yellow River Delta in China is sinking 1 metre every 4 years (250 mm/y). It's not really a sea level story when it comes to many populated coastal areas.

Why are deltas important?

James – Historically people have lived on them because they are really flat – 100 times flatter than a river valley; they have only a few metres of elevation change over 100 km. Plus, they have very rich soils, so they make for good farmland. In addition, they are great hubs for transportation to inland areas.

Being flat also makes them good places for cities to expand, and the last 50 years has seen a big population expansion on deltas – cities such as Dhaka. Twelve megacities on deltas have expanded from 62 million in 1975 to 153 million in 2010. The expansion appears to be speeding up.

What’s happening as a result of the sinking?

James – Flooding both from rivers and the sea (storm surges) is increasing, so there's a loss of life. There was a storm surge in the Irrawaddy in Myanmar/Burma in 2008 when 200,000 people were killed. But people are still living on the delta. However, 2 million people have left the Indus delta in Pakistan to move to higher ground as salt water has invaded the farming zone. Reinsurance companies charge ever more money to insurance companies for covering human infrastructure on deltas. 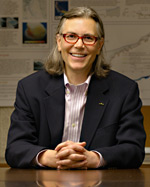 James Syvitski is a professor of geological sciences at the University of Colorado in Boulder. He works in the forefront of Computational Geosciences on sediment transport, land-ocean interactions and Earth-surface dynamics, and has won numerous awards for his efforts. Since 2011 he has served as the Chair of the International Geosphere-Biosphere Programme.

What are the remedies?

James – Each one of these deltas is like a snowflake – they are all a little different. So you can talk about one, but the problems and solutions may not be the same for another.

The Po Delta (near Venice in Italy) subsided largely because methane was being pumped from underground. They stopped the pumping and the delta is sinking 10 times less fast than it was. But the land surface is not actually rising, and it’s still below sea level. As a caveat, there is a proposal to inflate with water the land under the city of Venice so as to increase its surface relative to the sea by 25 cm.  The worry is that there could be damage to the cities infrastructure while the land rises.

The Chao Phraya River Delta subsided because of groundwater being pumped out to supply Bangkok. So they introduced a tax on water use, such as showers. In Shanghai, the local government slowed the rate of pumping water out of the ground.

However, when countries set up commissions to look at the natural environment, it's often water/river courses they're concerned about, like with the Rhine. There is not so much focus on the delta – the land mass.

Could Dutch-style engineering – building giant polders – be the solution?

James – I think it's too much to expect other countries to follow that example. 25% of the Netherlands is below sea level, but it’s a small, rich country, so they can afford these projects. Many countries with large deltas are nowhere near the Dutch level of GDP.

Where countries have tried this geo-engineering, they go broke. China in the 15th, 16th 17th and 18th centuries used 12% to 15% of GDP to try to control the Yellow River from spilling onto its historical flood plain. It caused all sorts of problems, was never really successful and in fact the flood frequency and magnitude increased. Modern engineering is more effective, so likely to be a lesser burden. But still, a large amount of money is needed.

Since dams are a major part of the problem, can’t we stop building them? Could some be pulled down?

James – Old dams trapped sediment, but modern dams can be designed to allow sediment through at different times of year. This is also good for hydro-electric projects, as a build-up of sediment can damage the turbines.

But what do you do with the tens of thousands of dams already built? On average, one large dam has been built a day for the past 130 years. Some, you can take out – but very few.

Most dams have a lifespan of 50 to 200 years, and most were built since 1950. Maybe you can remove them 50 or 100 years later, when they have filled up with sediment and are not of economic value. But removal is not a story for the next 20 or 30 years.

The rivers in question often run through several countries: The Mekong River originates in China and then flows through – or borders – Laos, Myanmar / Burma, Thailand and Cambodia, before reaching the sea in southern Vietnam. How does this complicate the search for solutions?

Sustainable Deltas 2015 is an ICSU-endorsed initiative which seeks to mobilize scientific and outreach activities globally towards knowledge sharing, awareness and cooperation for the prosperity and sustainability of deltas in a changing world. The goal is to set up a working partnership on delta sustainability among scientists, policymakers and the general public with a focused year of activities. It is the result of a community-led effort which spanned several years, with support from many scientific organizations including IGBP, WCRP, IUGG, IUGS, IGU, INQUA, LOICZ, ISPRS, IAPSO, NCED and American Rivers. For more information, please contact Efi Foufoula-Georgiou, University of Minnesota, efi@umn.edu

James – Friction can be within a single country – between upland and lowland people – or between countries.

If there's no will for collaborative action, there is little the downstream communities or countries can do. Countries can go to the UN court and try to get an issue like that resolved. But I haven't heard of cases where this has been successful and an upstream country has agreed to change its plans.

How has our knowledge of deltas advanced recently?

James – The techniques we use today are far better than in the past, and that has had a big effect. Satellites can detect millimetre changes in vertical subsidence. That has allowed us to look at and prospect where things are happening. Ten, 15, 20 years ago, this was not scientifically on the radar screen. Now it is, and there are increasing voices around the world.

What kind of new discoveries has the technology enabled?

James – Fish farms often use a lot of ground water, and now we can pinpoint, “This particular fish farm has caused this.” The Asian deltas used to be the rice bowls of the world. But they have become the protein bowls of the world in the last 15 or 20 years. You can make a lot more money in shrimp and fish aquaculture than growing rice. But the fish farms won’t be around for the next generation if the land sinks below ocean surface.