‘To be inclusive, you need more voices’ – Q&A with Sheila Jasanoff

How should we start thinking about how co-production relates to the design of a new research programme designed to have practical outcomes?

Sheila Jasanoff – Well, I think it’s important to distinguish two versions of co-production – the Science and Technology Studies one and the commonsensical one. I distinguish what I mean by co-production from what I jokingly refer to as Miramax co-production, the kind you see referred to when the film credits roll.

The second version is very consistent with one idea of democratising politics. To be inclusive, you need more voices – transposed to research, the idea is that all of these stakeholders sitting around the table are bringing in perspectives that are not shared by the others. Then you get a good product that can only come about if everybody has brought their insight into it. So in the film context, the person who is doing the design, the script, the editing, the sound system, each one needs to contribute to get the final product.

And if that means one sense of the term is a specific arrangement to get a job done, in research terms to create robust knowledge, what of the other one?

Sheila Jasanoff – My co-production is much more about ontology (what a thing is)and norms (how things ought to be) than about knowledge – though of course you need the knowledge as well. What I say is that we have co-production of science and social order, of is and ought.

One of the most innovative aspects of Future Earth is the idea that knowledge will be co-designed and co-produced, with scientific researchers and stakeholders actively involved throughout the whole process of knowledge development. This three-part series examines the relevance of co-design and co-production for Future Earth.

Contemplating co-production
Future Earth aims to involve multiple stakeholders with the design and production of scientific research. Jon Turney offers a personal view of how that might work.

'Co-design for relevance and usefulness'
Enabling multiple voices to be heard is the critical challenge for co-design in Future Earth, says Melissa Leach, Vice-Chair of the Science Committee.

The key thing is that I don’t think of co-production as a strategic move to get a robust result. My co-production is something that is going on in the world, like it or not.

Is there perhaps a sense that one is a subset of the other, that having the notion of the larger sense of co-production we can bring it into our thinking about practical measures to achieve co-production of knowledge?

Sheila Jasanoff – When I was first writing about co-production more than 10 years ago, people asked exactly that. The conclusion I came to was that, well, co-production is a social scientific idea… And there is a process of looping back between analysis and behavior. The words and concepts with which we describe society become part of the self-conscious apparatus of reflection. That is what we academics would ideally want!

So how does this looping back of ideas lead us to view research programmes?

Sheila Jasanoff – You might think of weak co-production as people sitting round a table to produce robust knowledge that is more useful, more robust, because people will buy into it, because they’ve already bought into the making of it. But in strong co-production you are not just constructing a representation of the world as it is, but also concurrently a representation of the world as you want it to be in various ways.

Could you describe an example?

Sheila Jasanoff – Take the IPCC. It’s an experimental body in the sense that it is a new body trying to bring a new kind of problem into the world. It is clearly bumping up climate to become an entity of globalscale.

There were precursors to some extent – there was the World Meteorological Organisation – so that meteorology was seen as a worldwide phenomenon. And earlier there was the British Empire with its various measuring stations around the world.

Nevertheless, the IPCC is a self-conscious effort by governments of the world to say there shall be a body that is now responsible for creating a transnational phenomenon, for turning climate into a global common property. Climate change is not your thing or my thing. It is now a world thing. And it is also a supra-national kind of thing – not French climate plus British climate plus American climate plus, oh,… New Guinean climate, but a global phenomenon that we should all buy into.

And should we see that representation of the world as one that might have been different?

Sheila Jasanoff – I keep going back to this moment – Anil Agarwal and Sunita Narain in New Delhi published a manifesto in 1991, Global Warming in an Unequal World.

They made the point that the way global warming was being framed at that time was reproducing a state of inequality that already existed in the world.

All molecules were equal under this framing – carbon was carbon was carbon – and the IPCC discussion was not paying any attention to the substrate of activities from which the molecules were coming and had come. Their manifesto suggested there should be a distinction between subsistence emissions and luxury emissions, because the third car in a garage in the developed world, emitting carbon when it is driven, should not be entitled to the same set-aside as the emissions coming from a rice paddy of a subsistence farmer in the global South.

But Agarwal and Narain were mixing up the language of science and politics – they were naive co-productionists if you like. Because if you say “subsistence emissions” or “luxury emissions” you are taking emission, which is a word from the physical world, and attaching to it a normative value out of the social world. They were actually saying that you cannot create carbon as a global entity that we should care about, or create global markets in which carbon is traded, if from the first it comes loaded with history and with values attached… and you’d better recognise that point if you want to make global climate policy.

They implied that, on ethical grounds, carbon markets would fracture. 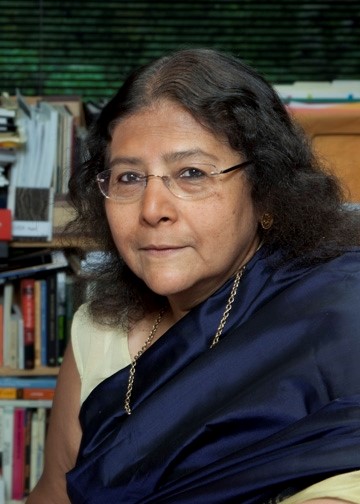 Sheila Jasanoff is a Professor of Science and Technology Studies at the Harvard Kennedy School. A pioneer in her field, she has authored more than 100 articles and chapters and is author or editor of a dozen books, including Controlling Chemicals, The Fifth Branch, Science at the Bar, and Designs on Nature. Her work explores the role of science and technology in the law, politics, and policy of modern democracies, with particular attention to the nature of public reason.

And over 25 years we’ve seen that happening. Even though the IPCC was constructing a world in which carbon was value neutral, and seen as equally dangerous wherever it was, Agarwal and Narain were saying, in effect, no it’s more dangerous if it’s coming out of overconsumption and less dangerous from subsistence.

If we study that example from this point of view, what does it give us to go on in setting up a new research effort?

Sheila Jasanoff – What it tells us is that a research programme is always embedded in a normative understanding of what are the right questions.

Science normally works inside paradigms that generate normal sorts of questions, partly based on available methods, and partly related to instruments. We know pretty well what the next interesting question might be when we’re sitting inside of a relatively stable area of inquiry.

But the questions we face today are antiparadigmatic in every kind of way. As a result, we don’t understand very well how to generate the big questions that might lead to genuinely different  research programmes. But one can have hunches, and I think there could and should be more creative ways to marry interpretative social science, moral philosophy and hard core natural science in generating those research programmes. I don’t know in advance what they would look like!

But there are places we can look for ideas?

Sheila Jasanoff – Well, there are mundane examples that immediately spring to mind. Many occupational disease problems, and quite a few environmental problems, have come into view not because scientists went out looking as a consequence of what they were already researching, but because issues emerged from people looking at the phenomena of their lives. Where had the fireflies gone? Where had the songbirds gone? Water table depletion. Unusual sickness among children. So that’s one model for raising new questions for research, and it’s very well established. Ask people what concerns them and then also draw on their sense of what it is that’s going wrong. So if they say that we didn’t leave the fields fallow in the way that our grandfathers did, don’t write that off immediately as superstition, but actually look to see if there is something in the fact that the fields were left fallow.

I think another thing that we haven’t done is look systematically at some of the ur-examples of major technological breakthroughs and their unintended consequences.  One example that is particularly instructive in this respect is the green revolution.

People agree it increased yields from food crops. But the counterpoint in many places was more inequality and long-term environmental consequences like over-use of pesticides. So even taking a very well-studied case like that, around which opinion is still polarised, and trying to get people to talk to one another might generate new questions about what we should be trying to find out about. Looking again at what seems settled history is a non-trivial thing to do.

What else should we try and learn from the previous history of technologies?

Sheila Jasanoff – It seems to me that there are a set of morality tales here. I’m not myself alone smart enough to say this is what each one means, and here’s where to go next. But treat each of them as a parable, and think with me what each one implies about what went right and what went wrong. We live in a world of complicated flows that are not chartable if you come from one area of society alone, even the area of science. We’re talking about human behaviour and changes in behaviour, and in collective behaviours, none of them easily predictable. Who would have thought 10 years ago that the rise of the iPhone would give you selfie culture?

People play with the technology once it is in their hands. And what is a research programme other than a somewhat systematised way of playing? Let’s think harder about the world we are creating, and then find the questions that are going to be productive to ask about the future of this world, or about where it came from. That should help us with making a better future trajectory for research.

Sheila Jasanoff’s edited collection of essays States of Knowledge, on the idea of co-production provides some useful further reading: http://www.amazon.com/States-Knowledge-Co-production-International-Sociology/dp/0415403294

Her own Chapter 2, Ordering Knowledge, ordering society, can be found here (pdf): http://isites.harvard.edu/fs/docs/icb.topic251437.files/Fall%202007%20papers/Jasanoff_papers/Jasanoff_States_of_Knowledge_Ch2.pdf

An earlier (1997) Jon Turney interview with Jasanoff in which she sketches a version of co-production is here: http://scienceobserved.wordpress.com/2013/04/04/science-society-and-co-production-of-knowledge/