In September, nations meet to agree the universal Sustainable Development Goals. The deadline for the goals is set for 2030. Indicators will be essential to measure progress – you can’t manage what you can’t measure.

Today, we (the International Geosphere-Biosphere Programme and Stockholm Resilience Centre) publish a dashboard of 24 indicators which depict the dramatic acceleration in human enterprise and the impacts on the Earth system over the last two centuries. What is apparent is the synchronous acceleration of trends from the 1950s to the present day – over a single human lifetime – with little sign of abatement. These trends are known as the Great Acceleration.

Led by former IGBP Executive Director, Will Steffen, and first published as part of the first IGBP synthesis (Steffen et al., 2004) the 24 graphs – 12 socio-economic and 12 Earth system trends from 1750 to present– are strong evidence that the Earth system has moved to a new state. Some have even proposed Earth has entered a new geological epoch – the Anthropocene. Changes in human production and consumption, indicated by gross domestic product, direct foreign investment, energy consumption and telecommunications, are reflected in changes in the Earth’s natural systems: climate (greenhouse gas levels, global temperature), ocean acidification, terrestrial biosphere degradation and fish capture. 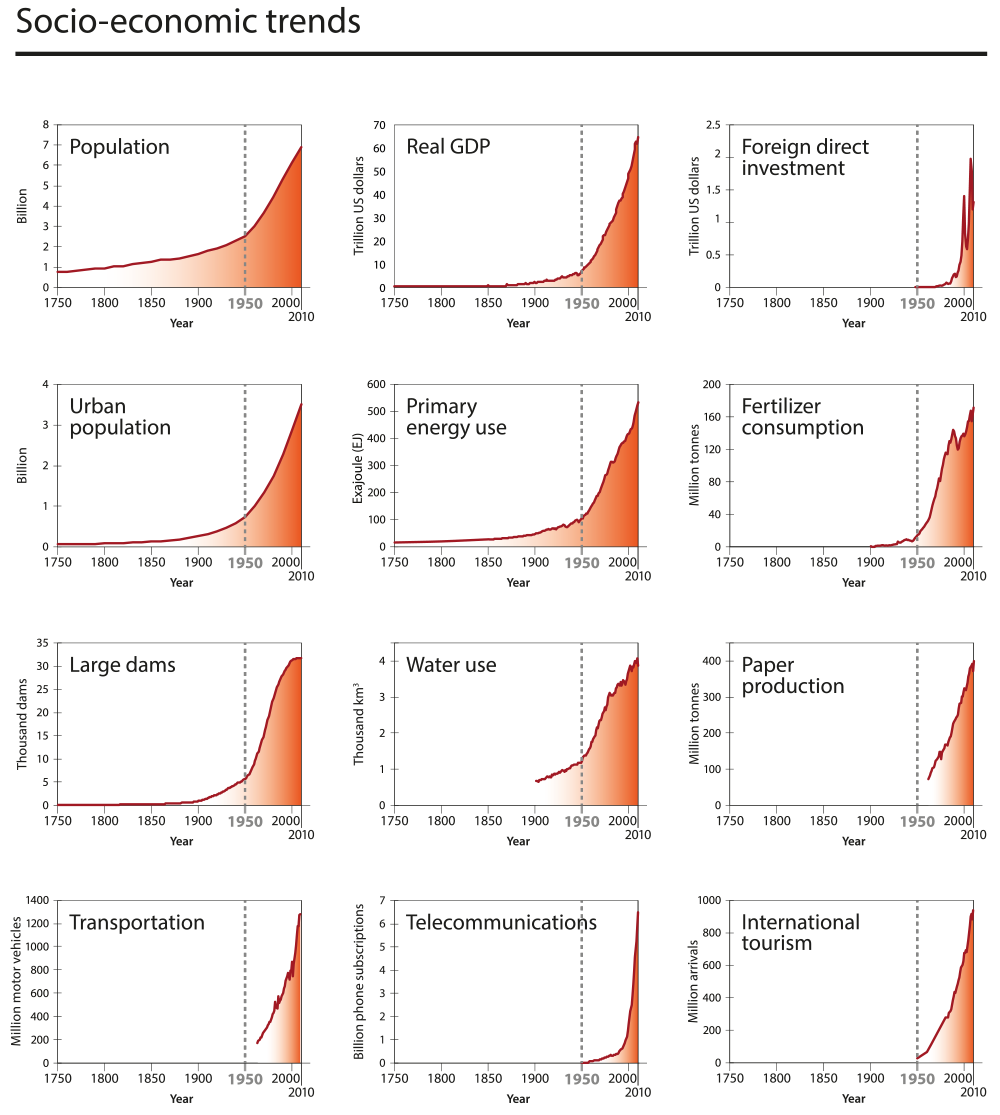 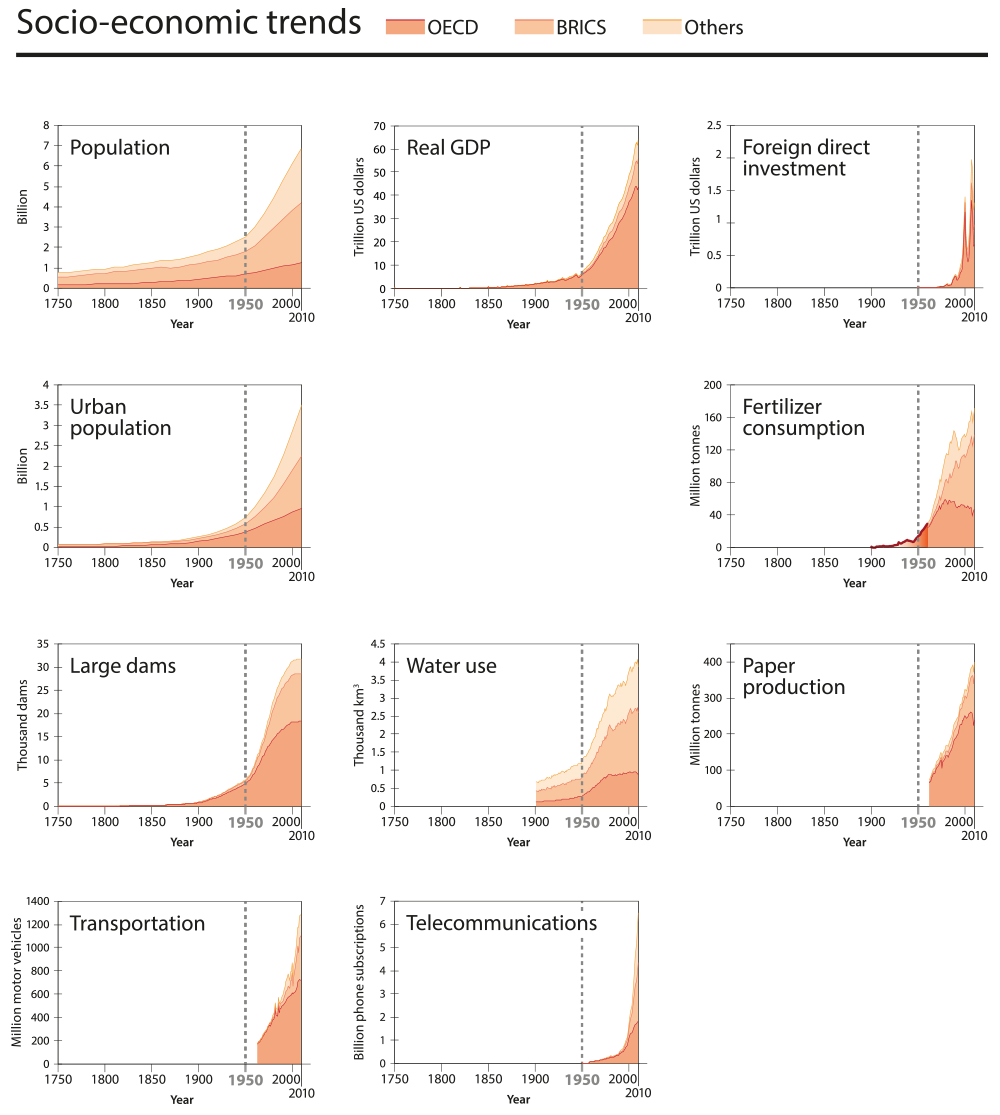 We have now updated the graphs to 2010 and include an analysis of the relative contributions of wealthy nations, emerging economies and the developing world to the human enterprise. The analysis highlights the inequities between nations. The emerging economies of the BRICS (Brazil, Russia, India, China and South Africa) now show a significant contribution to production, but the lion’s share of consumption still lies within the developed OECD world, despite its relatively small proportion of the global population.

When viewed together, the indicators allow us to distinguish the signal from the noise. Many indicators are now beyond natural variability and Earth is in a quantifiably different state than before. Several significant Earth system processes are now driven by human consumption and production.

When Paul Crutzen first proposed the idea of the Anthropocene, he suggested it probably began as the Industrial Revolution kicked off around 1800. He changed his mind recently, saying the 1950s is a more likely candidate. We agree. This analysis offers evidence from an Earth system perspective that the beginning of the Great Acceleration marks the start date of the Anthropocene. Are any of the curves bending towards a more sustainable path? Some trends are beginning to show signs of slowing. The construction of large dams, domesticated land and fish capture are beginning to flatten out. Unfortunately this stabilisation is limited by capacity: we are reaching our limits in the number of large rivers, available land and fish stocks.

We are seeing an intensification of agriculture and a move to aquaculture to meet the demands for crops and seafood. Fertiliser consumption in OECD nations has decreased since the 1970s, but consumption switched to the BRICS nations, resulting in a steady increase in the global trend.

There are glimmers of hope. A success story is the Montreal Protocol, banning ozone-depleting substances. Antarctic ozone loss is apparently stabilising. Many other indicators – carbon dioxide, temperature, ocean acidification, terrestrial biosphere degradation – however, remain on an unsustainable trajectory.

Many issues, for example air pollution or severe eutrophication, could be avoided if developing nations bypassed – or leapfrogged – some of the polluting stages of development that wealthy nations have put behind them. One example of leapfrogging is how mobile telephones, now included in the Great Acceleration, have negated the need to install expensive landline infrastructure throughout Africa. Furthermore, phone infrastructure can be powered by renewable energy in remote places.  Like telecommunications, not all upward trends need to be perceived as negative. The rapid rate of urbanisation has the potential to create new, more sustainable ways of living and organising society, and urban dwellers tend to have a smaller carbon footprint than those living beyond city limits.

This update of the Great Acceleration indicators is part of IGBP’s final synthesis, which will be complete by the end of the year. The synthesis, which involves all IGBP projects, brings together the results from thousands of scientists around the world who have contributed to IGBP over the years. As these networks transition to Future Earth, we hope that the Great Acceleration project will continue and be regularly updated.

By 2030, when time is up for the new UN goals, their success, or not, will be etched in the Great Acceleration graphs.

Global Change and the Earth System (2004)