A planetary boundary for biodiversity

The planetary boundaries framework, first published in 2009, introduced us to the possibility of distilling a complex Earth system – of land, oceans, atmosphere and life – into 9 global-scale dimensions responsible for keeping the Earth in its current hospitable state. The processes included in the planetary boundaries framework are climate change, biodiversity loss, land-system change, biogeochemical flows, stratospheric ozone depletion, ocean acidification, freshwater use, atmospheric aerosol loading, and chemical pollution. The authors worked to identify measures of each dimension, called control variables, and establish safe boundary zones in these measures, beyond which thresholds and abrupt or undesirable change might lie. The boundaries have been likened to avalanche warning signs, stepping off a kerb into traffic, lights on the dashboard of a car – they provide an early indication that we are approaching a potential threshold in a planetary process, beyond which we risk destabilising the Earth system. The framework has been effective in getting the environment onto the table at a variety of development fora and in bringing Earth-system knowledge to bear on the challenges of sustainability.

A recent update of the boundaries has just been published in Science. Based on advances and new contributions made over the past 5 years by various research communities, the update presents a number of enhancements including improvements in individual boundaries. While the 2009 paper focused on the identification of a consensus set of planetary processes, authors were only able to establish control variables and boundaries for well-known global-scale processes such as climate change, stratospheric ozone, and ocean acidification. For the remaining boundaries, their regional scales of operation; lack of global datasets; and/or uncertainty around their interactions with the way the Earth system functions made the original paper reliant on placeholder variables and interim boundaries – a clarion call to scientists to contribute to the further development of these planetary boundaries.

And this is precisely what the DIVERSITAS community (an international programme of research on biodiversity) did with the biodiversity loss boundary – convening a workshop of biodiversity scientists from around the world with colleagues from the International Geosphere-Biosphere Programme (IGBP) well-versed in the planetary boundaries work. Foreshadowing the kinds of collaboration envisaged by Future Earth, a few heady days in early 2012 were spent pondering the ecosystem in the Earth system, the wonderful – but daunting – complexity of biodiversity, and the possibility (or not)  of global-scale thresholds. The resultant paper by DIVERSITAS colleagues and partners – which finally surfaced in 2014 – clarified weaknesses in the species extinction-rate boundary proposed in the original paper and put forward alternative approaches to determine biodiversity loss boundaries at global and sub-global scales. The Science publication uses these alternatives to develop what is now called the biosphere integrity boundary. It follows the DIVERSITAS publication in highlighting that the biosphere – the fabric of life on earth made up of organisms of animals, plants, fungi, microorganisms and their ecosystems – plays two key roles in keeping the Earth system in a safe space. The first role – the functional role – recognises the enormous importance of the biosphere in cycling nutrients, chemicals, materials, waste and energy through the Earth system – by so doing removing pollutants from the water and air, regulating the climate, fertilising soils and much more. The second role, played by the genetic material making up the biosphere, allows the biosphere to persist and adapt under changing conditions, thus perpetuating these functions into the future and making the Earth system more resilient to change.

As usually happens at the global scale, ideas precede data, and so the Science paper falls back on global extinction rates (with caveats and updated thresholds) to capture genetic diversity and its role in supporting Earth system resilience to change. In exploring the functional role this new work presents an example of possible new approaches at sub-global and biome scales. Further new measures are imminent thanks to the efforts of communities such as DIVERSITAS and their core projects now transitioning into Future Earth. Similar advances are also clear in several of the other boundaries with contributions from other projects within Future Earth, such as the major update to the biogeochemical boundary, which draws on the work of Steve Carpenter (PECS) and Elena Bennett (EcoServices).

One of the most significant outcomes of the DIVERSITAS contribution to the biosphere integrity boundary was the concluding realisation in the GEC paper that “biodiversity’s role in supporting a safe operating space for humanity may lie primarily in its interactions with other boundaries, suggesting an immediate area of focus for scientists and policymakers” (Figure 1). The biosphere, through its interactions with Earth system energy, nutrient and material cycles, plays a role in – and is affected by – climate change, biogeochemical flows, freshwater use and other of the planetary processes. Managing the biodiversity boundary can therefore play a role in slowing or preventing crossing of the other boundaries, and conversely the biosphere risks being pushed closer to its boundary by changes in other planetary processes.  This interactive nature of the boundaries is also more obvious in the updated planetary boundaries framework which now recognises the “core” role of biosphere integrity and climate change through their interactions and feedbacks with the other seven boundaries. 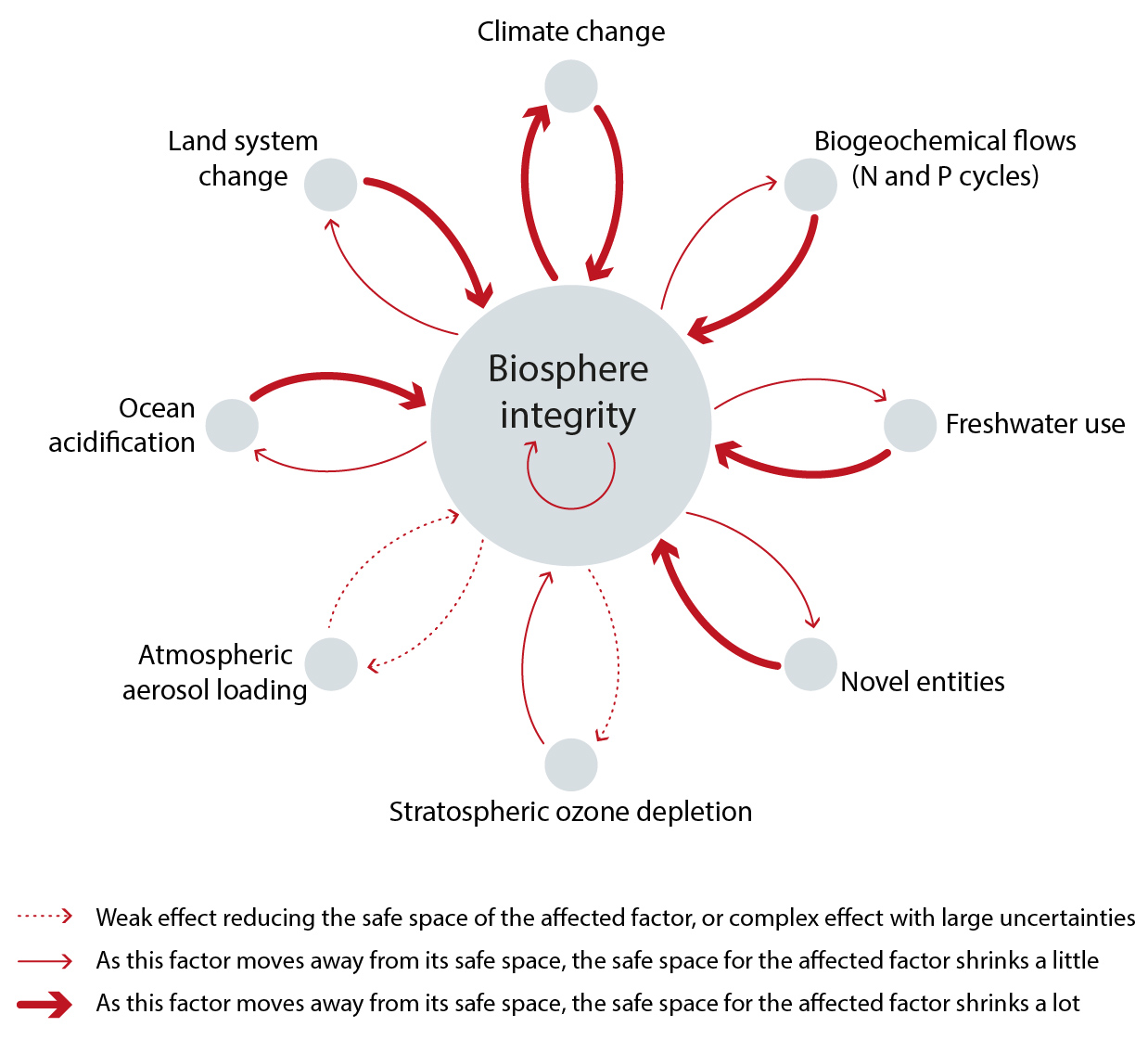 Fig. 1 The interaction between the biosphere integrity planetary boundary and other planetary boundaries. As a given factor (i.e. boundary type, such as biosphere integrity or climate change) moves further away from its own safe space, the arrows indicate changes in the factor (another boundary type). In all cases positive feedbacks exist, so a change in the factor away from the safe space will also move the affected factor away from the safe space. Thicker arrows denote stronger and more closely related effects. Thinner arrows indicate weaker and less closely related effects while dashed arrows indicate a weak and/or complex effect with large uncertainties. Source: Steffen et al. (2015) adapted from Mace et al. (2014) 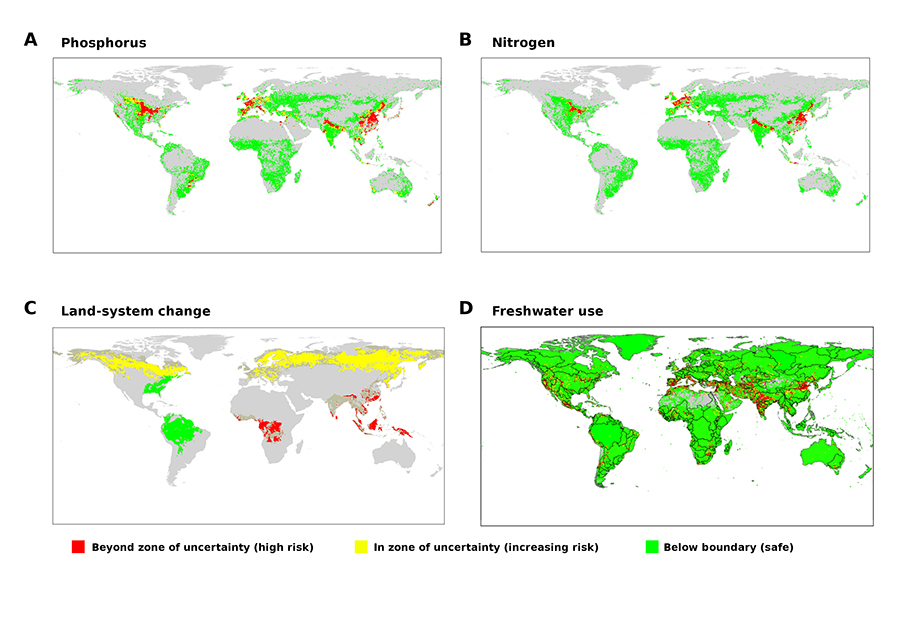 High-resolution images are available in Science

Further enhancements to the planetary boundaries framework include a new two-level approach that now recognises the sub-global heterogeneity and regional scales of operation of some of the boundaries. This approach proposes sub-global level boundaries which – if transgressed – affect the Earth System at a global scale. Three boundaries: biogeochemicals, freshwater use, and land-system change; now include both a global boundary value and regional distribution functions indicating where boundaries have been transgressed or not at regional scales (Figure 2).

The results of such interdisciplinary collaboration have the potential to really speed up the move towards the cutting-edge knowledge needed to make transitions to sustainability – part of the vision behind Future Earth. As the publication acknowledges, there is some way to go to bring the planetary boundaries into a truly interdisciplinary space. We have already seen the evolution from Earth System boundaries to ‘doughnuts’ that integrate measures of social justice, such as income and social equity, and with the help of platforms like Future Earth, hopefully onward to truly intertwined social-ecological science and practice.

This article was updated on 6 February to correct Figure 1 from an earlier version.

Achieving the SDGs with Biodiversity: An Integrative Factsheet