Following publication of its Fourth Assessment Report climatologist James Hansen criticized the IPCC for what he called “scientific reticence,” citing the “tendency for ‘gradualism’ as new evidence comes to light” as being at odds with the urgency of communication “when an issue with a short time fuse is concerned”[i]. Emphasizing the “huge gap between what is understood about human-made global warming and its consequences, and what is known by the people who most need to know, the public and policy makers,” Hansen suggested the need for “scientists as a community” to step up and find appropriate “supplementary mechanisms” to meet these communicative and pedagogic needs[i]. This was a crucial acknowledgement from a key figure within the climate science community of the complicated issues of political and societal reception that had dogged scientific assessment and policy advisory work on climate change since the 1980s. Now after eight years and the publication of a fifth IPCC assessment these issues continue to dog that work. But how well equipped are scientists as a community to meet the challenge identified by Hansen? 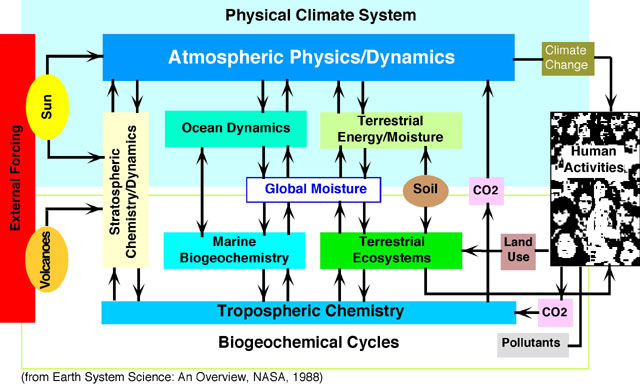 One hard lesson that we have learned from the first five IPCC assessments is that rising scientific confidence and consensus do not in themselves produce shifts in societal values and norms, or changes in human behaviour on a significant scale. Amplification of the scientific message is not the answer to the cultural dilemma we now face. In a time when truthiness and factoids are capable of undercutting the value of facts and scientific validity in the marketplace of ideas, ideology and public opinion, we need to adopt more sophisticated approaches to the dissemination and reception of current scientific knowledge in our societies. This applies not only within our political and social institutions but even more decisively within the sometimes counter-intuitive, messy spheres of mass media and public culture.

Also in this series…

Environmental humanities – another view
A climate scientist’s perspective on integrating knowledge from the humanities in discussions of global change.

Walking on eggshells? Millennial-scale sustainable community management
Research in action – the background on a collaboration linking the humanities and disciplinary science.

The circumstances that have given rise to the Anthropocene concept require that we reassess our assumptions about human agency and human effects on the earth system. Human activities, and thus human choices, clearly lie at the root of the great environmental predicament of our age. To paraphrase David Nye, a leading historian of technology, there is nothing deterministic about any society’s choice of an energy regime[ii]. The processes by which societies negotiate and effect regime changes, moreover, are neither natural nor comprehensible strictly within the parameters of the Natural Sciences. They are cultural transactions subject to political, social and economic contingencies. The great environmental predicament of the early 21st century is not primarily an ecological crisis, though its ramifications are far reaching within ecological systems. Rather, it is a crisis of culture. Unpacking the complexities involved in this crisis requires expertise and analytical tools from a panoply of knowledge communities that obviously include the Natural Sciences while also extending a great deal beyond them.

Experts well equipped as a community to engage complex cultural phenomena and sociological, philosophical and political questions that bear significantly on climate policy are to be found in ample numbers within the ranks of the Humanities and Social Sciences. The Environmental Humanities (EH), an international research field in its ascendency, is particularly well poised to contribute to the Global Change research agenda.

Environmentally engaged research in the humanities extends back well over half a century, most notably in fields such as environmental anthropology/archaeology, environmental history, environmental ethics and more recently in literature and environment studies (otherwise known as ecocriticism). Approaches to environmental research questions typical of distinct humanities disciplines such as these can be contrasted with those of a now rapidly unfolding interdisciplinary EH community. For all intents and purposes this research community has come into force only in the past few years as individual disciplinary currents converge into a common stream that may eventually inundate, and possibly replace, the tributaries that have formed it. Never before have environmentally-focused humanities scholars from so many disciplines been in conversation with each another, and increasingly with researchers in the social and natural sciences. This innovation is a defining aspect of the Environmental Humanities movement, in contrast to the largely mono-disciplinary research communities out of which it emerged. In addition to liberating vital knowledge from disciplinary silos, the rise of interdisciplinary EH holds the promise of generating new knowledge that might be difficult or even impossible to achieve otherwise. Many of the greatest challenges now facing our societies globally are so expansive and knotty (or wicked) that game-changing breakthroughs are unlikely to emerge from within the borders of any individual disciplines.

The EH field as broadly configured in these terms can be usefully contrasted with Integrated Environmental Humanities (IEH), an approach now gaining ground in the context of the Future Earth core project IHOPE. IEH research mobilizes expertise from a spectrum of disciplines that cut across the major domains of science and inquiry in order to unpack the black box of “Human Activities” (represented iconically in the famous Bretherton diagram of 1988) that remained for so long underresolved and underexamined within the field of Earth System Science.

Without understanding ourselves – including how we respond to natural and societal challenges – we can hardly expect to make reliable models or predictions of outcomes that require taking human behaviour, choices and responses into account. If the humanities “are a unique repository of knowledge and insight into the rich diversity of the human experience” from which we learn to make sense of our “responses, motivations and actions” in the face of challenges”[iii], then it is risky, to say the least, to omit humanities knowledge from scientific assessment and consultation processes informing environmental policy.

Yet within our established institutions of scientific assessment, advisement and policymaking internationally, engagement of the Humanities knowledge community remains unrealized, indeed scarcely unattempted. There is certainly room for critique of study fields in the Humanities for not stepping up to the table to make the relevance and value of their knowledge better understood to policymakers and the wider scientific community. Yet such critiques would also assume, in error, that there have been places at that table for the Humanities. This has not been the case in the relatively brief history of scientific assessment and environmental policy advisement represented by such institutions as the IPCC or the United States National Climate Assessment (USNCA).

The most recent U.S. National Climate Assessment identifies the need for a more successful integration of experts from a wider range of competencies to aid in the societal reception of scientific findings, citing “a need for ‘science translators’ who can help decision-makers” by enabling them to more “effectively incorporate advances in cli­mate science into decision-making.”[iv]

Yet to view the humanities and social sciences in strictly instrumental terms as facilitating the translation of scientific knowledge into an accessible language for policymakers is to perpetuate deficiencies in the larger scientific assessment and policy processes that have tended to reinforce a disjuncture between science and public understanding, on the one hand, and between the current state of knowledge and best informed policy on the other hand. To turn to expert humanities researchers not for the depth of their knowledge concerning values and ethics, or historical trends in human thought and behaviour, but for their ability to translate a highly technical scientific message into the popular idiom is not unlike engaging an accomplished composer to tune your guitar.

Within the IHOPE Circumpolar Networks programme concerted efforts are being made to realize an Integrated Environmental Humanities (IEH) approach that incorporates both Social Sciences and Humanities disciplines into a flexible structure for problem-driven research responsive to grand societal challenges. In this context the term Humanities is not meant to call to mind a bounded liberal arts scholarly domain separate from the natural sciences. Rather it is meant to signal the entanglement, even the centrality, of the human in the present age of accelerated global change. Humanities, in this sense, can extend to any field of inquiry foregrounding human agency in relation to environmental challenges – causes, influences, effects and solutions.

The anchoring project Inscribing Environmental Memory in the Icelandic Sagas (IEM), for instance, foregrounds elements and approaches generally underrepresented in global change research. The first of these is the rich repository of knowledge that can be drawn from material cultural evidence of the human past, both historic and prehistoric, building on bodies of evidence of socioecological change long preceding modern instrumental records. The second is the integration of expertise through transdisciplinary collaborations among researchers in history, geography, archaeology, palaeo­ecology, literature studies and digital humanities.

Iceland represents a rich case study because of its extensive historical and literary sources and abundant archaeological and palaeoenvironmental data. It also represents an extremely interesting case study in landscape and ecosystem transformation. The IEM project focuses on the period between Iceland’s first settlement ca. AD 870 and the end of the 15th century, a time frame that witnessed substantial environmental change. Before Iceland was settled in significant numbers by Norse and Celtic-derived peoples in the late-9th and early-10th centuries there is no evidence of any previous human habitation or activity on the island that could have impacted its ecosystems on an appreciable scale. The project therefore examines a particularly interesting test case for the study of anthropogenic environmental change over several centuries, as well as of the effects of both anthropogenic and naturally occurring environmental change on the development of an autonomous frontier society in an erstwhile pristine land. These effects included large-scale deforestation and eventual soil erosion due to overgrazing of livestock. Icelandic society managed to be remarkably resilient with respect to environmental change in contrast to the Norse settlements in Greenland. The picture of human ecodynamics in the first 500-600 years of Icelandic history is actually a dappled one, characterized by both successes and failures in environmental management, demanding reassessment of historical narratives that rely on deterministic arguments[v], while also raising many new questions about the interdependency of social and ecological factors.

By integrating analyses of historically-grounded literature with archaeological studies and environmental science, IEM can offer new insights into how past societies understood and coped with environmental change. In this way the past can be examined as an archive of human responses to socio-ecological challenges, and these completed experiments of the past (in archaeologist Carole Crumley’s coinage) may help us navigate the challenges of the present and future in a time of accelerated global change.

The question of what can lead us to a sustainable future is too complicated to be ultimately understood much less resolved within the boundaries of single disciplines, or from the perspective of isolated communities of experts, however knowledgeable they may be concerning a narrower range of questions. Without a reintegration of research communities, enabling us to draw upon a fuller repository of human knowledge and creative capacity, it will be exceptionally difficult for the international community to address the major threats of the Anthropocene in this century while also achieving and sustaining human and ecological welfare on a planetary scale.