It is impossible to predict what the world will be like in 2050, but it is possible to shape that world. At Future Earth, we work with researchers, innovators, and decision makers to shape a climate-secure and sustainable world. To make this happen, we have to better understand how the world might evolve in light of rapidly changing social and natural systems. It is essential to continuously anticipate and reflect upon a range of plausible futures that can illuminate unexpected opportunities and risks on the horizon.

It was with this in mind that the ClimateWorks Foundation teamed up with Futures CoLab, a collaboration between Future Earth and the MIT Center for Collective Intelligence, to conduct an interactive scenario development exercise. The goal of the exercise was to explore the socio-economic, political, and technological developments that could impact climate action strategies over the next 30 years, identifying blind spots and gaps in current thinking. The exercise brought together over 150 experts from 38 countries to engage in facilitated dialogue using an online platform over a four-week period this past summer.

The final report coming out of this exercise is now publicly available: “Broadening the Dialogue: Exploring Alternative Futures to Inform Climate Action”

A number of drivers, or forces which could drive the world in different directions, emerged from the online dialogues. These were grouped into four categories:

These drivers provide insights to people reflecting on climate action from a variety of standpoints – including philanthropists, governmental actors, private sector decision-makers, academics, and those working in civil society. Some drivers may be more relevant than others depending on the type of action strategies under consideration.

The Futures CoLab platform and process provides a mechanism for increasing the diversity and frequency of foresight exercises around global systemic challenges.

Futures CoLab engages researchers and innovators around the world in customized facilitated online dialogues to build strategic foresight on global systemic challenges. Anticipation and foresight are of critical importance in a world increasingly characterized by volatility, uncertainty, complexity, and ambiguity. Scenarios, increasingly used by business and national security groups, for example, are a powerful tool for such foresight. The Futures CoLab platform and process provides a mechanism to expand and scale up such foresight efforts to facilitate the tackling of increasingly complex global environmental changes in a dynamic world. These strategic foresight scenarios provide decision makers with bespoke, targeted and more dynamic assessments to complement existing scenarios such as the Shared Socioeconomic Pathways (SSPs) used by the Intergovernmental Panel on Climate Change (IPCC), which provide a longer-term broader perspective on the climate challenge.

While five scenarios were described in the exercise, only four are unpacked in the report. These are: 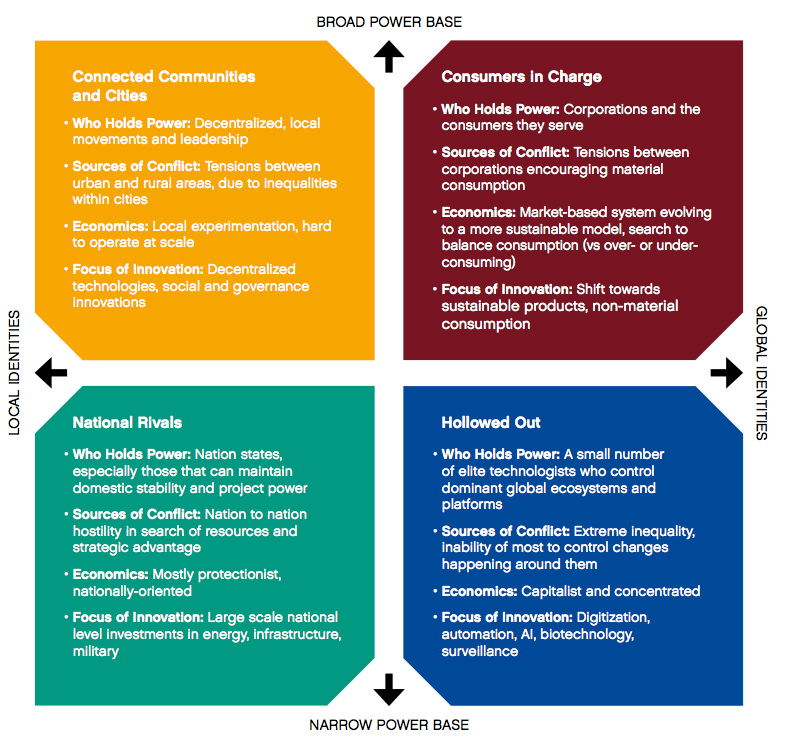 We made the conscious decision not to elaborate on the fifth scenario, Trust Returns, in the final report. This scenario was the most optimistic of the five, portraying a future world in which relatively minor adjustments to existing international organizations and agreements are largely sufficient to ensure collaboration on climate change mitigation, and where citizens from around the world become directly engaged in decision-making.

Aspirational scenarios are incredibly important, giving people hope and providing them with guidance on how to work with what we’ve got while still striving for a better future. We came to the conclusion, however, that many people are already, often implicitly, planning for a future world similar to the Trust Returns scenario. Thus, exploring this scenario in more depth would not fulfill a major goal of the exercise: to identify blind spots in current thinking and shedding light on novel ways to think about climate action strategies in even the most challenging futures.

The remaining four scenarios are explored in more depth with regards to the implications they may have for current climate mitigation strategies. This is especially important in light of the unprecedented philanthropic investments being made into climate change mitigation. What current programmes may be most successful? Which are most at-risk, and why? What new challenges and opportunities could emerge?

Thinking about these questions in light of different possible pathways we could take over the next 30 years is a critical starting point for discussions which need to take place across all sectors. As was recently established in the IPCC 1.5°C report, transformations across the board will be necessary in order to keep planetary warming—and impacts for socio-ecological systems—to an acceptable level. Broadening the picture, achieving the Sustainable Development Goals alongside the Paris Agreement 2°C target will require transdisciplinary and collaborative work at a scale never seen before.

Futures CoLab helps to broaden the dialogue on climate action strategies in a way that transcends any single perspective or group, nudging us towards a more sustainable world one question at a time.

Dr. Jennifer Garard is a Science Officer at the Future Earth Montreal Hub, and the Project Coordinator on the Futures CoLab project.