The projection by the Global Carbon Project estimates that CO2 emissions will rise a projected 2.7 percent, with an uncertainty range between 1.8 percent and 3.7 percent. In 2017, carbon emissions grew by 1.6 percent after a three-year hiatus.

The projection comes from the 2018 Global Carbon Budget, published on Wednesday by the Global Carbon Project in the journals Nature, Earth System Science Data and Environmental Research Letters. GCP is sponsored by Future Earth and the World Climate Research Programme.

The rapid growth in low carbon technologies are not yet sufficient to cause global emissions to peak, let alone drive emissions aggressively down and limit climate change following the Paris agreement goals.

“The 2018 rise in fossil CO2 emissions place us on a trajectory for warming that is currently well beyond 1.5°C,” said Lead researcher Prof Corinne Le Quéré, director of the Tyndall Centre for Climate Change Research at the University of East Anglia. “It is not enough to support renewables. Efforts to decarbonise need to be expanded throughout the economy.”

Global fossil CO2 emissions (fossil fuels, industry and cement) grew at over 3 percent per year in the 2000s, but growth has slowed since 2010, and from 2014 to 2016 emissions remained relatively flat with only a slight increase.

“The continued rise in global emissions is deeply concerning. The recent IPCC report on risk of 1.5 degrees warming was a somber wakeup call even for many of us deep in the science,” said Future Earth’s executive director Amy Luers. “This news is particularly difficult, when it is clear that we have the technology, the knowledge and business acumen to cut our emissions exponentially. Tackling climate change has now become a win-win. We just need to start down the winning path.”

Although global coal use is still 3 percent lower than its historical high, it is expected to grow in 2018, driven by growth in energy consumption in China and India.

Oil and gas use have grown almost unabated in the last decade. Gas use has been pushed up by declines in coal use and increased demand for gas in industry. Oil is used mainly to fuel personal transport, freight, aviation and shipping, and to produce petrochemicals.

Budget co-author Glen Peters, research director at CICERO in Oslo, who led one of the studies, said: “The rise in emissions in 2017 could be seen as a one off, but the growth rate in 2018 is even higher, and it is becoming crystal clear the world is failing in its duty to steer onto a course consistent with the goals set out in the Paris Agreement in 2015.” 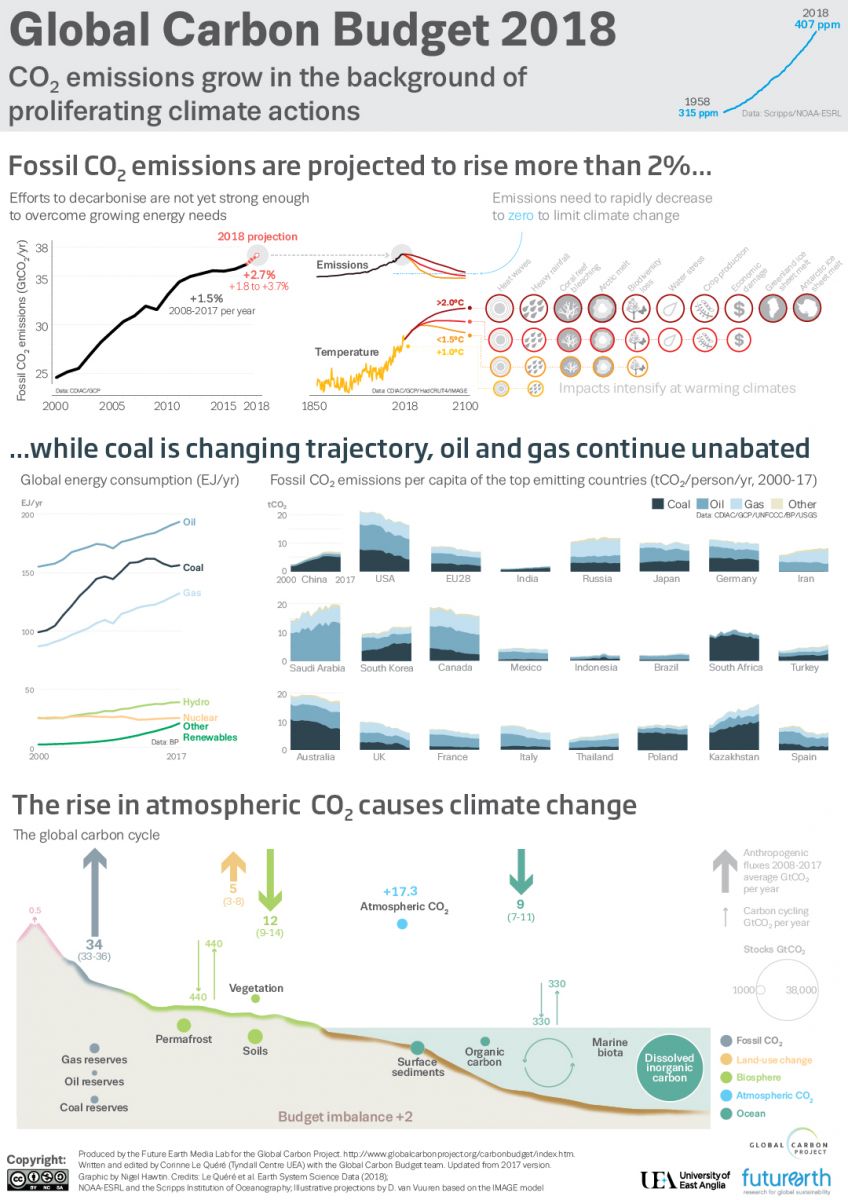 The 2018 carbon budget at a glance

Atmospheric CO2 concentration is set to reach 407 ppm on average in 2018, 45 percent above pre-industrial levels.

“There was hope that China was rapidly moving away from coal power generation, but the last two years has shown it will not be so easy for China to say farewell to coal quickly. Coal is likely to dominate the Chinese energy system in the decades ahead, even if the skyrocketing growth seen in the mid-2000s is unlikely to return,” said Jan Ivar Korsbakken, Senior Researcher at CICERO Center for International Climate Research in Oslo.

U.S. emissions, accounting for 15 percent of global emissions, look set to grow about 2.5 percent (+0.5 percent to +4.5 percent) in 2018 (based on figures from the EIA), after several years of declining emissions. This is largely due to weather conditions requiring more heating in cold months and more cooling in hot months. It is expected that U.S. emissions will decline again in 2019, indicating that cheap gas, wind, and solar will continue to displace coal.

Rest of the World. Emissions in the rest of the world, the remaining 42 percent of global emissions, are expected to grow 1.8 percent (0.5 percent to 3.0 percent) in 2018.

The 10 biggest emitters were China, the U.S., India, Russia, Japan, Germany, Iran, Saudi Arabia, South Korea, and Canada, with EU28 as a whole ranking third (full details for top 20 emitters in the table below).

The Global Carbon Budget is produced by 76 scientists from 57 research institutions in 15 countries working under the umbrella of the Global Carbon Project (GCP). The budget, now in its 13th year, provides an in-depth look at the amount of fossil fuels that nations around the world burn and where it ends up.

Achieving the SDGs with Biodiversity: An Integrative Factsheet