For the first quarter of 2019, Future Earth has compiled a roundup of the top global sustainability research papers by Altmetric score. The score does not evaluate the calibre of the research but is a quick measure of science that gleaned the most media attention, through news, blogs, twitter, facebook and other mentions.

In the top spot, a paper concluding that the measles, mumps, rubella (MMR) vaccine does not increase autism risk, yet the hypothesized link between the two continues to challenge vaccine acceptance (Annals of Internal Medicine).

Other media-snatching snippets within the top ten included; validation for the youth climate activist movement (Science), the continued decline of butterflies, bees and beetles (Biological Conservation), an exploration of the societal and political commonalities between malnutrition and climate change (The Lancet), and more evidence that the warming of the world’s oceans is contributing to rising sea levels, destruction of coral reefs and increased rainfall intensity (Science). 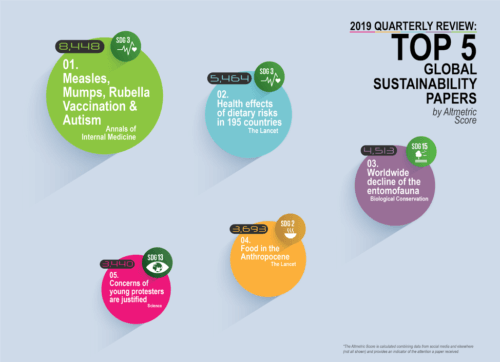 In our selection of the top sustainability articles, we were guided by the United Nations Sustainable Development Goals (SDGs), which recognize that eradicating poverty in all its forms and dimensions, combating inequality within and among countries, preserving the planet, creating sustained, inclusive and sustainable economic growth and fostering social inclusion are linked to each other and are interdependent.

The top 30 global sustainability articles for the first quarter of 2019, by Altmetric score

The Coronavirus Crisis as an Opportunity for an Innovative Future