As the ongoing COVID-19 crisis has made clear, the state of our planet is a result of dynamic interactions between human and natural systems. In the Anthropocene, a new era in which humans are the driving force of change on Earth, the setting of actionable targets to guide our interactions with nature is an important dimension of global sustainable development. The Earth Commission, a venture of Future Earth, has set out to synthesize the science needed to underpin such targets. But is it possible to draw a line in the sand and outline a safe and just space for human societies on the planet?

In late April, the Earth Commission took an important step towards this goal, by establishing its first working group, the Earth and Human System Modelling Intercomparison Project (EHSMIP). Led by two modellers with ample experience in the field, Professor Govindasamy Bala, Indian Institute of Sciences, and Professor emeritus Nebojsa Nakicenovic at International Institute of Applied Systems Analysis in Austria, an international group of renowned scientists gathered for a first virtual meeting. Both are active in leading global modelling initiatives within the Intergovernmental Panel on Climate Change, the Intergovernmental Science-Policy Platform on Biodiversity and Ecosystem Services, The World in 2050, and Future Earth’s global research project AIMES (Analysis, Integration & Modelling of the Earth System).

“There is strong evidence that current development might push us beyond the boundaries of the Earth system, where the Earth system services we all depend on are no longer functional,” Nebojsa Nakicenovic said. “The good news is that we have now gathered a dream team – we have some of the leading modellers represented in this group. A major contribution will be to build the scientific community and the general understanding of how important this is for humanity.” 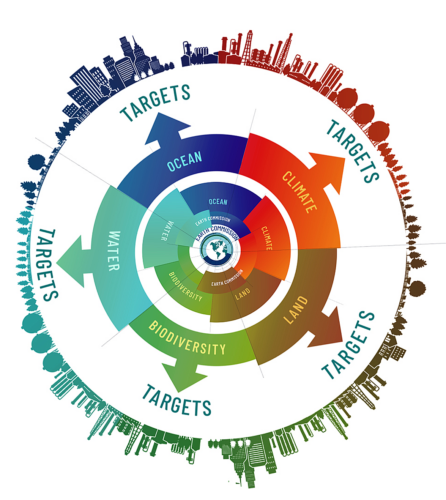 The work will build on both Earth system models – which includes climate and other parts of the biosphere – and so-called integrated assessment models, which integrate natural and socio-economic and other human systems.

“Instead of developing new models, we should build on existing approaches and focus on interrelations and feedbacks across Earth and human systems. Our project will attempt to capture these interactions and identify the thresholds or targets in biophysical components of the Earth system for maintaining a safe and resilient planet in the coming years,” explained Govindasamy Bala.

To determine where the limits are – where the Earth system will not any longer be able to support stable and just human societies – the group will investigate future pathways of how humanity might develop. A number of plausible pathways that would push the systems beyond their critical functionality, into a domain that is no longer sustainable, will be tested.

“Once we have understood that a little bit better, in an integrated way, we would like to think of a pathway that avoids this – a sustainable development pathway,” said Nebojsa Nakicenovic.

This will be an important contribution to the Earth Commission’s synthesis of science to underpin the setting of science-based targets that could then be applied by companies, cities, and individuals. The Commission is part of the Global Commons Alliance, a collaboration of organisations and businesses who aim to transform the world’s economic systems to protect the land, water, atmosphere, and oceans that all life on Earth depends on.