You are Director for Climate Change at the Skoll Global Threats Fund. Could you tell us a bit about the Fund, its mission and activities?

Amy — The Skoll Global Threats Fund was started about four years ago by Jeff Skoll, the first president of Ebay. Jeff initially created Skoll Global Threats to help address five threats: pandemics, climate, water insecurity, Middle East conflict, and nuclear proliferation. I oversee our work on both climate and water. We address these issues in an entrepreneurial way, with a focus on information, science, governance and public engagement. We’re a fund, so grant-making is a primary tool for our activities, but we also drive some of our own projects. 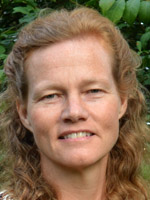 Amy Luers is Director of Climate Change at Skoll Global Threats Fund, where she oversees climate and water initiatives. She is a member of the Future Earth interim Engagement Committee. Amy is on twitter @amyluers.

Tell us about your work on climate change at the fund. Does the Skoll Global Threats Fund support research projects, and if so, how might scientists get more involved with your work?

Amy — We don’t directly support research on climate change. To the extent that we do invest in research it is focused on clarifying problems and enabling solutions. We support some social science research on the public understanding and communication of science within the scope of climate change. We’ve also supported research in climate risk management with a focus on understanding how to most effectively enhance access to information for climate and water security. In recent years there has been advancement in the technologies available for acquiring climate and water information. Satellite imagery, for example, is becoming cheaper, higher resolution and more frequently updated, but we don’t yet have the social capacity to make full use of it in a practical way to improve resource and risk management. So in this space we have invested in research that seeks to quantify the public benefits of these new technologies and explore the possibilities of making these information technologies available for public good applications.

You recently published a couple of papers raising concerns about the 2 degree climate target which is the bedrock of the UNFCCC climate negotiations. What are your concerns and what might replace it?

Amy — The 2 °C policy target has provided a valuable focus to international climate negotiations. It has helped to characterize the magnitude of the climate problem and provided a framework around which nations could negotiate their commitments to reduce emissions of the heat trapping gases driving global climate change. However, I believe the time has come to look beyond this target as the sole metric of success and enable a more holistic discussion of the full spectrum of risks, and a more systematic consideration of the diversity of values and risk perceptions that are core to the climate challenge.

Furthermore, while meeting this target is still technically feasible, a growing number of analysts suggest the chances of achieving the lower emissions trajectories required to limit warming to 2 °C are quickly becoming unlikely. As a result, we must seriously confront the challenges of managing the risks of a high-magnitude warming world.  But we are not doing this. And maintaining a narrative that says that all we need to do is to keep temperatures from rising beyond 2 °C is not allowing us to effectively and thoroughly explore and address the risks of rising above this level. We are avoiding discussion about really dramatic but important issues that we need to think about, such as the reshaping of our development patterns and potential emergency geoengineering measures such as solar radiation management. I do not think that solar radiation management is something we should pursue, but I do think we should understand thoroughly the risks and opportunities.

Ultimately, this is all about trade-offs and values among different nations, different populations and different generations. We need to move from thinking about the climate crisis from the perspective of one single top-down threshold of danger to a broader risk management space, which captures the full spectrum of risks and recognizes that diversity of  risk perceptions.

I want to stress that I do think thresholds are extremely important concepts in science, management and communication – what I’m saying is simply that relying on one single global threshold has become challenging because people disagree on what the threshold should be, and some are so concerned about the challenges today that they can’t conceive of two, three or four degree thresholds. Coming to terms with that is critical. I believe moving towards a risk management perspective can help us overcome the black and white implications of a narrative that focuses on one single global threshold as the sole metric of success.

We are at a very important juncture in the global climate negotiations – how we can build momentum on climate communications over the next two years, and what, for you, would be the best possible outcome by Dec 2015 when we get a final global agreement?

Amy — I’m not convinced that there will be a final global agreement in 2015, but I do believe that 2015 is a critical marker for keeping momentum at a global scale toward significant climate action. Ultimately, for action at a global scale we need to think beyond the top-down approach to negotiations and define the move toward a more distributed approach to addressing the challenge, at least over the short-term. We actually have very few good historical models that suggest that we will be successful in reaching a global agreement that’s enforceable and that would set up an emissions reductions regulatory system at a global scale.

We’ve begun to move in the direction of a more distributed solution, but we still have a long way to go. In the absence of effective national and international policies there are cities, states, regions, companies and sectors that are beginning to make significant changes. This is certainly the case in the US. I am hopeful that these sub national efforts will eventually bubble up and create a tipping point at the national scale and eventually at the global scale. Ultimately, no matter what happens in 2015, as a global society we must realize that we will be living out this experiment with our global climate system for a long time, and we need to be monitoring carefully and adjusting wisely. Targeted and problem-driven science will be critical.

Amy — I’ve talked about boundary networks which are made up of boundary individuals. I put forth the concept of Boundary Networks as a complement to the boundary organization in the digital era. Engagement in the digital age is not about broadcasting facts but rather joining conversations. We need to build a new relationship with the public which is focused on joining conversations, expanding them and sustaining them. It’s not just about taking the world’s best scientists and teaching them to communicate, it’s about working with scientists who are already connecting to communities. People, not science, need to be seeds of the conversations.

I have had discussions recently about a growing interest in building networks of scientists as citizens. This is an interesting twist on the citizen science concept, which blossomed over the last decade. Citizen scientists are citizens who participate in science, for example by taking part in reporting bird observations. Science citizens are scientists who consciously engage in public discussions as citizens and among citizens. Most people in the world have never met a scientist. In part because there are just not that many of us, and in part because we tend to stick together. We need to change this. Understanding and addressing this experiment that we’re doing to the Earth will require engaging more fully with society and looking at the full range of questions we must be asking as the inevitable surprises and changes unfold.

Previously you were leading a programme on Climate Change at Google. Do you think that the earth and environmental sciences community should be making better links with Silicon Valley in order to learn new ways to harness big data, to operate in a more networked fashion, to rethink and innovate the way research is being conducted?

Amy — I think there are several ways that the earth and environmental science community can learn from the Silicon Valley mindset and approach to increase their impact, and to a certain extent this is already happening.

One is by transforming the access to and usability of information for decision making. Massive amounts of information is now being gathered every minute about all aspects of our social and earth systems that were never collected at scale before – through mobile devices, satellite imagery and user produced content. Meanwhile, more and more people have access to analytic and decision making tools at home or at work. As a result, we are rapidly distributing approaches to earth systems monitoring and governance.

There needs to be more of a push to get science to be operational more quickly and to get people using it. I’m not saying we should do this with all research. But we can learn from the innovative and entrepreneurial mentality of Silicon Valley. The approach of much of the tech world is to release products early and often, then test, fail, revise and release. In the end the best product wins. We need to think about how we as scientists working to inform society on such challenging problems as climate change can adopt a similar approach to how we seek to solve problems while not stepping astray from the much needed rigour of the science.