Sustainability worthy of our longing

“We are longing for mentors that take care of us as human beings; mentors that act like parents, not like political dictators.” These are the words of Kuda Mudokwani from Zimbabwe, reflecting on struggles and longings of early career change-makers in Africa for sustainable transformations. Early career change-makers include researchers, activists, policymakers, artists, and others working actively on transformations to sustainability. Kuda, along with more than 50 other change-makers from all over Africa, came together at the Future Earth Seedbeds of Transformation conference held 9 – 11 May 2018 in Port Elizabeth, South Africa. There, the group reflected in a space that we, Hannah and Dylan, created to explore the question “How might we work in ways worthy of our longing?”

This question was initially posed by Injairu Kulundu, from Kenya/South Africa, who is working with 21 change-makers in South Africa to develop a liberatory African pedagogy. The refrain “work in ways worthy of our longing”, an elaboration of Salman Rushdie’s verse “a world worthy of our yearning”,  echoes the sentiment of great Global South writers and activists, who guide and mirror our longing, such as Steve Biko, Chinua Achebe, Ben Okri, Julius Nyerere, Paulo Freire, Winnie Mandela and Miriam Makeba. Inspired by Injairu’s pioneering work, we took this question to the Seedbeds conference and gathered early career change-makers from North, West, East, Central, Southern and diaspora Africa. The collective longing for change in how we approach sustainability work was threaded and woven together through informal side-events we hosted during the three days.

Sexual harassment and abuses of power

Let’s start with the bad news: The most shocking and painful revelation was that sexual harassment and discrimination based on gender is a major struggle for many young female change-makers in African academia and the NGO sector. The abuses of power within these institutions, which are meant to be supporting sustainability, shows that the UN Sustainable Development Goals (SDGs) on gender and equality are still future dreams even within the institutions on the frontline of sustainability transformation. This is deeply worrying and infuriating for us. Furthermore, womxn* from our group spoke openly about the inhospitality of their institutions towards motherhood and the painful choices early career mothers are forced to make between advancing their career or raising and supporting a family. They long for a shift of cultures within these institutions – cultures of care, of empathy and cultures that support the invisible work that mothers and fathers do to keep their families healthy and their work relevant and groundbreaking.

Yet, despite this difficult challenge, some change-makers brought to light positive experiences with their institutes. When one early career change-maker from South Africa voiced her needs as a mother and stood up for herself as a womxn, rather than being further persecuted and alienated, her supervisors listened and adjusted the work programme to accommodate her and her baby, which is an encouraging sign of empathy and care. That is to say, the situation for African womxn in sustainability research is far more nuanced than it might appear. Many early career change-makers in Africa have very supportive supervisors and leaders, who value them as human-beings, complete with emotions and histories and families.

The #metoo campaign shows that incidences of sexual harassment are rife in both the Global North and South; the phenomenon is certainly not exclusive to Africa. One of the biggest struggles remains: Who raises these issues? Who gets heard? The phrase ‘Me too’ was used by the African-American activist Tarana Burke 10 years ago but was only taken up when celebrities with economic and socio-political power used it. What does this mean for us as early career change-makers? We suppose it means many things. To begin with, it means that we need to stand in solidarity for all womxn and ensure that safe spaces exist where these issues can be voiced and acted on. It means that we need to raise concerns, challenges and struggles with conviction and with clarity, while also offering constructive alternatives.

We support more people than you think

Something that is perhaps not on the radar of fellow change-makers in other continents is the extensive, informal support system present in many African communities. Early career change-makers spoke about how many of them are not just supporting their immediate family, but also extended family members.

“Some of us have whole villages relying on us to succeed… the stakes are high for us”, reflected a young researcher from Nigeria. On average, they estimated that they each support at least five people, despite the early stages of their career.

This discussion emerged from the problematic framing of Africa as ‘resilient’ in a romantic sense. The resilience metaphor emerged from ecological science and although it is deeply problematic when applied to people, it is still widely used to describe social complexities and peculiarities. Or as one changemaker put it, “the systemizing of human experience”. Somehow, the amount of abuse and trauma Africa can handle and endure is presented as a positive characteristic of the ‘resilience’ hype. However unintentional this may seem, projecting ecological framings such as ‘resilience’ onto social realities has become a fast and loose technical conflation in sustainable development thinking, where striving for resilience has become our end game** as opposed to striving for flourishing.

This frustration emerged in the wider Seedbeds conference, too. Particularly, when defining Africa as either ‘vulnerable’ or ‘resilient’, we continue to further psychologically box and ghetto-ize Africa into a space of ‘surviving’ and not thriving. As one early-career researcher from Kenya powerfully suggested, the passion and tenacity of change-makers in Africa is driven by a deeply personal, politically and ethically accountable responsibility to those who made sacrifices to get the young change-makers to where they are today.  Essentially, our motivation is deeply personal and our aim is to truly prosper, not to merely be resilient to risk or avoid vulnerability. 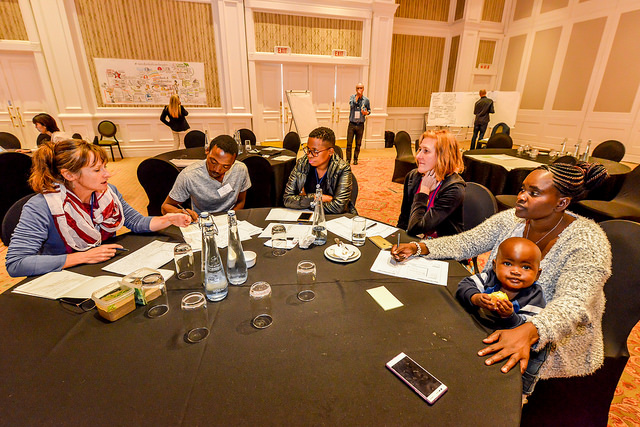 A female conference participant with her baby at the Seedbeds conference: enabling settings like this are desired by many change-maker womxn in Africa. Photo: Mark West/Future Earth

Creativity and the cultural politics of emotion

How can we translate our impressions and experiences of conducting research into the rigorous rules of academic writing? This question was articulated by early career change-makers together with the longing to be able to work more creatively and in non-conventional ways, and to incorporate indigenous ways of being into how we conduct research. This was particularly expressed by young scientists.

There was a longing for spaces and resources to engage (and affirm) the need to work with the cultural politics of emotion and its value in sustainability work, with a particular research focus on healing, and working with trauma and pain, both from the past (in how Africa has been treated) but also trauma emerging in the present, as most change-makers also engage as activists, not just academics. The early career change-makers emphasized that in Africa, there is a need to create a space where we can experiment with ideas in ways that we have never done before – instead of adhering to established rules of academic writing, which constrains many aspects of transformational work, such as emotional learning.

A broader support system across society

Securing support for the advancement of transformations to sustainability remains a major challenge for many African early career change-makers. They talked about barriers, such as job precarity and the never ending ‘hustle’ needed to stay afloat, as well as the need for more holistically structured grants. This is made more difficult in their daily lives by a lack of appreciation for their efforts by family members, friends and other members of society, as one early career change-maker said, “Many people don’t actually understand what we are doing. We long for home support”. More support at the local level is needed for academic activism and political rigour.

This struggle is something that early career change-makers from the Global North are experiencing as well. Discussions at the Seedbeds conference touched on the longing for more holistically structured grants that consider these pressures; invisible work; potential solidary alternatives such as basic income, primary capital, early career social banking, change-maker cooperatives and even alternative finance commons groups between North and South early career communities.

Essentially, what the change-makers are longing for are solidarity networks across early career communities and more holistic financial support from partners.

Now for the good news: Despite these difficult struggles, the receptivity of the mid-to-late career delegates and those who have been pioneering sustainable transformations long before we entered the scene was deeply reassuring. The richness of exchange, respect, empathy and sincere concern for our experiences and thoughts on how the next chapter of sustainable transformations should be framed was inspiring and nourishing for us all. The dialogue revealed that African academia faces many of the same problems as the Global North, yet these problems require careful contextualisation and re-framing when working in African countries.

While the reflexive space we created focused on what we are longing for, the engagement of the early career change-makers in the formal events of the Seedbeds conference and the caring relationships that many have with their supervisors and colleagues revealed that there is substantial groundswell of comradery, respect and mutual support.

We continue to reflect as we sift through the many challenges, longings and alternatives raised by our fellow early career change-makers. As a group, they will be developing articles for academic and non-academic audiences, and other multi-media manifestos from this process. We aim to create a platform for early career change-makers in Africa which puts their longing into practice: a solidary support system, a community allowing for personal reflections and emotive work, while maintaining scientific rigour and activism. We will also take these longings to the International Social Sciences Council’s (ISSC) Transformations to Sustainability (T2S) funded “Living Aula” or “monsoon school” in June 2018. This is a transformations to sustainability alternative to a summer school in Colombia, where we will be continuing this conversation with other early career change-makers from South America, Asia, Africa, Europe and North America. The aim will be to develop a new research and action agenda for Transformations to Sustainability. We are also establishing a working group, “Decolonizing Sustainability”, for the growing SDG Transformations Forum that was founded in September last year at the Dundee Transformations Forum. The outcomes of this process will also feed into and be taken up by the global Future Earth early career network. All of these steps will ensure that the longings and alternatives will enter into the wider transformations rhetoric and hopefully deeper into the culture of sustainability practice.

Special thanks to the ISSC and Future Earth for financial and moral support in nurturing this space to explore work that is worthy of our collective longing.

See here an interview with Felix Kwabena Donkor, a Ghanaian early career change-maker based in South Africa, reflecting on the early career space at the Seedbeds conference.

* Womxn is a more inclusive and progressive term than “woman” or “women”. It aims to shed light on the prejudices that womxn have to face on a daily basis, such as racism, sexism, transphobia, patriarchy, and many more. It also aims to show that womxn are not the extension of men but their own free and separate entities. Womxn is the most intersectional term as it includes trans-women and women of color.

Coulthard, S. (2012). Can we be both resilient and well, and what choices do people have? Incorporating agency into the resilience debate from a fisheries perspective. Ecology and Society, 17(1).