You are a politician with wide-ranging experience in sustainable development, commerce and media. How does your experience make you a good fit for this role?

Jairam Ramesh – I have spent the better part of almost three decades at the interface of policy design and implementation, and at the interface of policy implementation and communication in different areas like energy, industry, environment, climate, and development as it relates to the poorest and most marginalised sections in rural areas. I have had to build larger networks and alliances, which is what engagement is all about. Politics, Bismarck said, is the art of the possible. I believe it is so because politics is the one arena that allows for engagement with diverse viewpoints, each justified in its own sphere. It provides the space to take these sometimes complementary and often divergent viewpoints to effect a response that can forge principles with compromise. That is the only way to sustainable and meaningful progress, and I know from experience that it’s the most fruitful approach. When I was Minister of Environment and Forests between 2009 and 2011, I used this approach to arrive at decisions on complex issues like genetically modified food crops, balancing the needs of a growing economy, environmental security and equity. At the Copenhagen and Cancun climate change conferences in 2009 and 2010 I was privileged to play a pivotal role in the negotiations, engaging not just with official delegations but also with civil society, scientific organisations and the media.

You've had a long career in public administration and policy making. How have you worked with scientific researchers over this time? What were the challenges? And are there examples of a particularly fruitful – or particularly difficult – experience of working with researchers that stick in your mind? 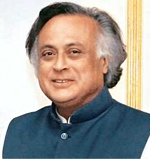 Jairam Ramesh is a member of the Indian Parliament with more than 30 years’ experience in economic and development policy, both as an official as well as a Minister. He was a member of the UN Secretary General's High-Level Global Sustainability Panel between 2011 and 2012, and played a key role in the UN Climate Change Conferences at Copenhagen (2009) and Cancun (2010). He has published widely on economic development, energy, environment, globalisation and India-China relations.

Jairam Ramesh – I was involved in an in-depth review of India’s Council of Scientific and Industrial Research about a quarter of a century back. In the late 1980s I was associated with the mobilisation of India’s science and technology community to meet developmental challenges in the areas of water, health, agriculture, education and telecoms. More recently I established the Indian Network for Climate Change Assessment, a sort of domestic IPCC. My own academic background and my years in public life have led me to the conclusion that science has a crucial role to play as innovators and solution providers. However, I have found researchers generally reluctant to engage with the broader public and sometimes lacking the skill sets to make such engagement mutually beneficial. The substance and style of engagement has to change significantly. Science has a crucial role to play but it must be embedded in a larger societal framework. Since time immemorial, science has been politicised and controversies have been par for the course: Galileo, Copernicus – the list is endless. But they persisted in their endeavours, reclaiming science, taking on controversies and leaving  something momentous and lasting. We see the politicisation of science over and over again in the case of climate change and global warming. Science cannot wall itself off from controversies: it has to engage with politics, controversy, and the world at large. Future Earth has to be the platform that ensures that science doesn’t wall itself off from politics and controversy.

Together with other members of the Committee and Science Committee, you will be responsible for providing strategic guidance on involving stakeholders throughout the research process. What are your priorities for developing and implementing Future Earth’s strategy on engagement?

Jairam Ramesh – Whatever we can do to make the Paris Conference in December 2015 successful should be an immediate priority. As someone from a developing country with huge domestic constraints and developmental needs, I believe that multilateral engagement under the United Nations Framework Convention on Climate Change is the best way forward to fashion a global response to the challenge of global warming. At the same time, I fully understand that a system based on consensus can be painfully slow, especially on an issue like climate change, where the science – though more certain now than ever before – is evolving, and the impact of decisions on economies, health, and poverty alleviation is immense. The multilateral process must be supported, and at the same time, other initiatives, not constrained by the demands of negotiations, must be leveraged. This is where I see Future Earth playing a role.

Future Earth can help find the synergies between the interconnected dialogues taking place, like the discussions on the Sustainable Development Goals (SDGs), bio-diversity – particularly access and benefit-sharing, and climate change. There is a degree of urgency in bringing some operational content to the on-going discussions on SDGs. It is not just about building bridges between different dialogues; Future Earth can play an important role in addressing issues that traverse science-technology-policy. Agriculture, transport and energy are three key areas where I think scientific engagement with policymakers, civil society, businesses and all other stakeholders is crucial if we are serious about addressing the challenge posed by global warming. Engaging with these key sectors will send out a signal to those at the negotiating table about what is required on the ground.

The full Engagement Committee will replace an interim Committee that has been in place little over a year. The Future Earth Secretariat is also going through a period of change as it transitions from the interim Secretariat to a new, executive Secretariat. I wonder about the challenges of becoming operational and starting to deliver on Future Earth’s commitment to engage with stakeholders in a short period of time. What needs to be done to make this happen?

Jairam Ramesh – We will all need to spend more time on this. Each member of the Engagement Committee has an individual responsibility, as well as the collective responsibility we share as a group. I see each member actively engaging with the media, civil society and the political class on a regular basis in their own countries. The full group may meet twice a year, but what it does between formal meetings will determine its impact. The next 12 to 14 months in the run up to COP21 in Paris, the finalisation of the SDGs, the signals to ICAO and IMO in addressing sectoral emissions, are crucial. The Committee has to hit the ground running, and this is not an impossible task as many of the members will already have strong linkages in their own countries and regions. As individual members and as a collective we have to find ways to connect with the networks that already exist and deepen our engagement.

Future Earth aims to engage with societal partners at all levels, from the local to the global, in order to deliver the scientific knowledge and solutions that society needs. At the same time, it can’t be everywhere at once and needs to prioritise its activities. Where do you see the key entry points for engaging with stakeholders, and how can Future Earth deliver on its promise to be truly global in its approach?

Jairam Ramesh  – Engagement is needed everywhere, but we need engagement in countries like the United States of America, China, India and the European Union for sure. Countries like the USA, which play an important role in global affairs, and China, which is an economic powerhouse, will require deeper focus. We can’t have a situation where either of these countries are not engaged. Yet, no matter how important these countries are, nor can we allow a situation where the world is held hostage to their scepticism or caught up in their web of denial. Climate change in its different manifestations is an obvious starting point: to this we must link the other ecological tipping points that cannot be ignored and which need sharper focus. Global warming, climate change and sustainable development are complex issues with economy and society-wide impacts. The task of the Engagement Committee is to ensure that the conversation on these issues is alive, embedded in science, responsive to developmental needs and aspirations, and at the same time to help evolve a range of solutions that are not contrary, and are rooted in ground realities. The challenge is to ensure the ivory tower meets the dirt path to create meaningful and sustainable progress.

T-shirts and the role of science at the UNFCCC